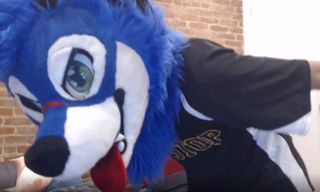 SonicFox may be the best fighting game player on the planet, winning championships for Mortal Kombat, Dragon Ball FighterZ, and more. He's not, as it turns out, quite as good at singing, but that's one of many things he did over the weekend during a 72-hour livestream, raising money for The Trevor Project. Over the course of three days, SonicFox's viewers donated more than $22,000 for the charity, which provides support to LGBTQ youth.

SonicFox spent a good chunk of the weekend playing through the Mortal Kombat and Injustice story modes, but he took breaks to play the piano, sing, and shave his mustache. That last one was for reaching the $20,000 milestone, and it's a great moment. "Oh god, this is terrible!" he says while he starts. "I've never shaved my mustache." By the end, though, he was into it.

There's also my personal favorite moment: Naruto running (in place) in a seemingly tiny room, the tongue of his fursuit helmet flapping up and down.

"Trans rights" was the recurring message of the stream, and at one point SonicFox wrote the words on his chest after a $500 donation. He also wrote "memes" on his forehead—it's a fun and lighthearted stream, and thanks to breaks and guest hosts SonicFox didn't run himself ragged by the end of it. "Time flies when you're helping trans people," one of the streamers says near the end.

SonicFox's stream was inspired by a similar marathon by Youtuber HBomberguy, who raised $340,000 earlier this year for transgender charity Mermaids, and included surprise appearances from Chelsea Manning and Alexandria Ocasio-Cortez.