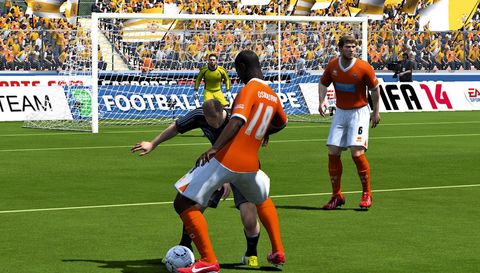 FIFA 14 has the same old problems as previous incarnations, but it remains the same great football game.

FIFA strives to mimic the off-pitch strategy and on-pitch tactics of real football, and in the 12 months spent with each annual iteration, its fans become accustomed to the weight of its physics and the subtleties of its animations. As one of those fans, I've learnt the possible arcs of an aerial through ball, and the movements of teammates off the ball. When you're so carefully attuned to the small details that make up a game, even a sequel that changes very little still manages to change everything.

FIFA 14's mountainous molehills begin with a small tweak to player momentum. Playing FIFA 13 meant keeping your finger permanently pinned down on sprint, hurtling your team of millionaires around at unlikely speeds. Do that now as a defender, and a brief sidestep can see you moving in the wrong direction with a significant amount of time required to turn around. Do it as the attacker, and well-timed challenge will remove the ball from your feet.

The result is a slower game, more dependent on passing and creating holes in defences by luring defenders to overcommit to challenges. Sprinting is for when you're on the break, with the pitch wide open in front of you.

To help you keep the ball at slower speeds, you'll rely more on your body to shield the ball, and on the right stick, which now performs skill moves all on its own. You're also more dependent on the AI steering your teammates into useful areas, and thankfully they do seem more willing to make breaking runs across and behind defences.

For the first dozen games, these changes felt like meagre tweaks with unsatisfying results. Slowly, as I adjusted, I came to appreciate the more thoughtful flow of each game, and the expanded thrill of taking apart an opponent and flicking the ball into the back of the net. FIFA's reign as the best football game – as a great game – is not in question.

But there are so many ways that the experience might have been improved or expanded on, that it's hard not to feel like the series is trapped passing the ball around in its own half. Problems from the old games return, from the hilariously bad commentary – worse even than real football – to goalkeeper snafus, bad pass assistance, and other frustrations. Given that next-gen consoles are getting a new engine with more advanced physics, it's all the more disappointing that our version feels like FIFA 13.5.

Luckily, the game's saving grace remains the same. The Ultimate Team mode lets you create your own fantasy football team, unlocking new players by buying packs with gold earned by playing matches or with real money. There's excitement to finding rare players, and if you're canny you can play this mode forever, and manage your team, without spending real money. I spent £6 and used it to get a goalkeeper and multiple premium gold packs. I didn't regret it, and the money spent has bonded me to the players on my team in a way I didn't expect.

But that's the only unexpected thing about FIFA 14. I wish that wasn't the case, partly because I'd have liked the series to try something new, or to correct its persistent niggles, and partly because I know it's going to again eat hundreds of hours of my life.

FIFA 14 has the same old problems as previous incarnations, but it remains the same great football game.