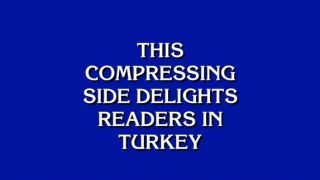 Endless Jeopardy is a Twitter account that is exactly what its namesake describes: endless procedurally generated Jeopardy clues. The bot, created by remix monster Neil Cicierega, spits out prompts in the traditional format, white text on a blue card, and rarely makes sense. Normally, that'd be the end of the joke, some goofy nonsense dressed up in fancy clothes, but Endless Jeopardy is a game you can actually play.

A new clue drops every hour and participants have 15 minutes to respond to each with an answer. But since clues are procedurally generated, the correct answers are based on wit. The top couple tweets with the most likes—preceded by the usual Who, What, or When, of course—gets a cash prize, with the most money going to the most likes. It's not real money, sorry to say, but it's still fun to keep score. The Twitter bot keeps track of your lifetime winnings.

The structure means the answers are typically clever punchlines, using wordplay to make sense and fun from nothing. Some choice cuts for you:

The winner, from @aedwardslevy: "what is Midnight in the Garden of Good and EVOO?"

Runner-up, from @dr_gigster: "What is Animal Farm to Table?"

Honorable mention because I laughed, from @cheekfaceREAL which is also a great band: "what is the fryble?"

The winner, from @sweaternine: "What is Hamsterdam?"

Runner-up, from @listensessions1: "What is New Wheeland?"

Second runner-up, from @MalachyHarvey: "What is Papua New Guinea Pig?"

Endless Jeopardy and its participants pump this stuff out hourly, a constant source of quiet, breathy chuckles with the occasional gutbuster out of nowhere.

I don't play often since I spend all my pun energy on the job, but it's nice to have in the feed, an ambient reminder of post-dinner family competitions that end in shouting matches. Harmless puns and the The Concept of Alex Trebek make it one of the best ways to turn a cloudy feed around. Take shelter from the time-consuming, graphically intensive games from this busy release season and play a nonsense game with nonsense people to decompress.