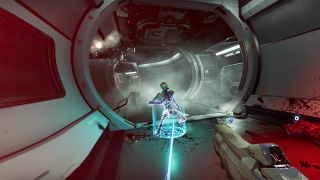 I played a bit of Doom VFR last week at a preview event, and while it was on a PSVR and not the Vive, it was pretty fun. The return of telefragging is especially great: in VR, you're teleporting into ailing enemies in order to get the glory kill. Brutal, almost nauseatingly violent, but hey: that's video games.

Need a new PC for Doom VFR? Check out our build guides:

Prefer to buy a prebuilt than building it yourself? Check out our guide to the Best Gaming PCs.

Doom VFR is out right now, so you can go ahead and telefrag until your heart is content (or at least, until your stomach tells you to stop). It's not just a VR version of the 2016 title, but instead a newly designed version intended to cater to VR's strengths and weaknesses. But will you be able to run it? Well, you'll need at least a 1070. Here are the minimum and maximum specs: