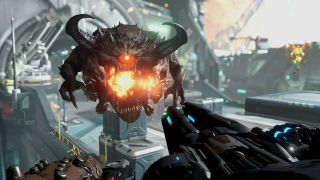 Doom Eternal is not a nice, relaxing game about slowly sauntering. It's fast, ultra-violent and you're going to be juggling a lot of guns, demons and abilities. But that doesn't mean you'll be done with it quickly. According to creative director Hugo Martin, it will take you around 22 hours to get to the end.

"We're hell-bent on engaging you from beginning to end," Martin told Gamespot. "This is a 22-plus hour game," adding that the first three hours showed off more stuff than you'd see in a whole playthrough of its 2016 predecessor.

That echoes what Wes wrote in his Doom Eternal preview, which threw a lot at him straight away.

"The sequel gives you those basic tools in the first five minutes, and then it keeps layering on more for the first three hours (and likely beyond)," he said. "Honestly, it's overwhelming, but Eternal's goal here is to essentially give you access to superpowers and then force you to learn how to use them instinctively, or you die. It's definitely following the Crank: High Voltage playbook on how to make a sequel."

2016's Doom, according to How Long to Beat, clocks in at around 11 hours if you're just focused on finishing the campaign, which is half of Doom Eternal's reported length, though your mileage will almost certainly vary.

Like Wes, I'm not so sure I can handle this much metal and violence for extended periods of time. I'll definitely be needing frequent breaks to cuddle my dog and go for walks in places not caked in viscera and bones. If it really will take 22 hours to finish, I predict I'll be done by this time next year.