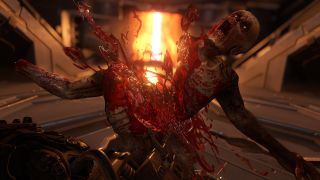 Doom Eternal was scheduled to be out in November 2019, until id Software pumped the brakes and pushed it into March 2020. By all appearances it's going to make that date—previews went live today (here's ours), and the overall impression seems very positive—but executive producer Marty Stratton acknowledged to VG247 that it's taken some pretty hard crunching to reach this point.

Stratton said that Doom Eternal was complete last year, and that no new content has been added since the delay was announced. Instead, the extra time made way for "a lot of polishing, hardening of the back-end systems," which more specifically included extra testing, exploit patching, and balance changes.

Unfortunately, while Stratton said that id encourages developers to take as much time as they need to get the job done, he also acknowledged that crunch was a fact of life for most of 2019.

"We really truly do try and be very respectful of peoples’ time and lives. We have very dedicated people that just choose to work a lot in many cases. It was nice because we want the game to be perfect. We want it to live up to our expectations and consumer expectations."

Crunch, the stretch of late-stage development during which studio employees work long hours for weeks or months consecutively, is a real problem for the videogame industry. It's bad for workers—as this New York Times headline succinctly puts it, "Videogames are destroying the people who make them"—and commonly regarded as an unproductive use of time. But it's also a very common practice, particularly at large studios.

CD Projekt was recently criticized for requiring crunch on Cyberpunk 2077, despite delaying it from April to September, which some thought would give the developers sufficient time to complete the game without having to work brutal hours. Interestingly, Stratton suggested that the same thing happened with Doom Eternal: "[A delay] takes a little bit of the steam and pressure out, but it’s almost one of those things where we’ll push it even harder to get even more just as tight as it possibly can be," he said.

According to Stratton, the delay and effort has led to the best game the studio has ever made. "I don’t think I’d say that if we didn’t have that extra time," he said.

Doom Eternal is scheduled to come out on March 20. It looks quite promising: Wes described it as "the most gleefully manic FPS since 2011's Bulletstorm" in his hands-on preview, and in my book that's very high praise indeed.