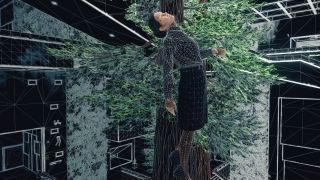 Software developers use debugging tools to test various aspects of games and make sure specific features that aren't visible to players using the finished version. These are usually disabled for when a game comes out, but as anyone who's ever typed "iddqd" into a Doom console knows, sometimes you find a few that can be used even after a game ships. That's sort of the case for Remedy's Control, and one player has used Control's debug to unearth a hint about upcoming DLC.

YouTuber ManFightDragon unlocked a suite of Control's debugging tools and showed them off in the video below. Most of it is devoted to showing off the free-look camera and some of the alternate renders in the game that show various shaders and effects, such as the wireframe view.

But another option that unlocks is the ability to jump to any mission in the game, which is where ManFightDragon found a reference to DLC, which you can see at about the 5:21 mark in the video. In addition to missions called things like "SM09 - Duck" and "SM10 - Roulette Wheel," there's one in pink text with the name St01_MM_04_Marshall_START_Plus_PS4_SM15_Dlc.

Obviously, the "Dlc" at the end of the string is the clearest indication that this is a mission planned to arrive as downloadable content. But another interesting bit is the name "Marshall." Helen Marshall is a key character in Control's narrative, and it's possible future DLC will feature her more prominently, or perhaps even cast her as the protagonist.

But Marshall is also the name of a main mission in the game, and it's one Remedy showed off in demos prior to release. So who knows, really? Control is an extremely cool game though, so if this means more of it is on the way, that's good news in my book.