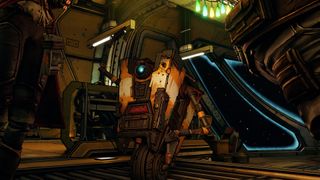 The Borderlands 3 Bad Reception quest is an early side mission that you should run into in the first half an hour of the game. After you've negotiated the rigmarole of the opening cutscene, selected your character, and fought off the first few crazed baddies of the Children of the Vault.

Shortly after you're unleashed on your first major open area, The Droughts. It's typical Pandora, all barren sands and tumbleweeds. Immediately opposite the passageway that leads you here is a scrapyard in which you can take on your first sidequest. Bad Reception in Borderlands 3 has a few tricky parts to it, so we're here with this guide to ensure that the start of your planet-hopping adventure isn't scuppered right at the beginning.

How to complete Borderlands 3 Bad Reception

To start Bad Reception you need to be at least level 5, which you should be at least most of the way towards upon entering The Droughts. In it you need to find different components spread across the zone, including a wire hanger and a spork.

Each area to be searched introduces you to some of the game's new mechanics such as sliding and mantling, so there's no shame in getting a little stuck when you're still learning the ropes. You're free to tackle each destination in any order you like, so get ready to jump through this guide a bit.

We'll start with shooting the three satellite dishes. You need to do this once you've spoken to the 'Completely Sane Kid' by his shack. Not to be confused with the large windmill in the background, you need to shoot the targets on top of his sorry excuse for a house, one at the base of the large windmill, and another near a satellite array. For the final one you may need to head round to the right of the shack and look to the left of the windmill to see it.

Next is the electrified cave (pictured below). When you enter you'll be met with a body of water with a nasty electrical affliction. The shocking supply comes from a yellow tube that runs from the water to a unit opposite the entrance to the cave. Near the top of it is a bullseye; shoot it and you're safe to proceed.

Claiming the wire hanger for Claptrap is terribly well signposted, but you need to climb up the mountain overlooking the closed entrance. As you look at the mountain, there's a route up it if you swing round by the right. Then you need to use ground pound: jump off the mountain overlooking the entrance with space bar and then press L-Ctrl mid-jump to initiate the move. If you've aimed your descent right, you'll be able to enter this previously-inaccessible area.

The final two are fairly simple, but test you on the basics of sliding and mantling. The satellite tower hones your skills with the latter, so keep a look out for edges smudged in yellow to indicate climbable surfaces. Hit space to jump, and then space again near the edge for it to work. The mechanic itself is a bit inconsistent, so don't be disheartened if you don't do it first try.

Then, finally, there's the old shack that requires you to slide under a closing door. To slide, hit L-Ctrl while running. This'll be a handy move for the rest of the game to get you behind cover quickly while your reload and wait for your action skill to recharge. When you're done claim your reward and get read to see the stars.