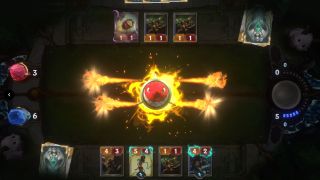 Need to know what the best Legends of Runeterra decks are? Legends of Runeterra is one of the newest card game kids on the block and with so many strategies and cards to discover, it’s going to take a while before players fully master it. Get ahead and learn about its most powerful options to give yourself a competitive edge.

I’ve collected a hearty list of the Legends of Runeterra decks with the highest success rates to date. I’ll update this guide as balance updates roll out, too. Whether you want a satisfying combo build, or a brutal aggro deck - these won’t let you down.

How to import Legends of Runeterra deck codes

Import one of the codes below to save time building a deck. Copy the deck code,  Launch the game, select Collection and then Decks. Click Import Deck, paste the code, and save. Hey presto: your deck is now ready to use.

The best Legends of Runeterra decks

Barrier Fiora from Hewitt Benson suits players who appreciate flexible strategies. At 3 and 4 mana, Fiora and Shen are strong early threats. Always try to replace your hand (hard-mulligan) if you don’t receive. Spend Shen’s barrier on Fiora to keep her on the board and level her up. As a Challenger, Fiora can also choose which enemy unit blocks so that you can remove intimidating enemy units a little easier.

Greenglade Caretaker has strong synergies with Shen courtesy of its +2/+0 effect whenever an ally receives a Barrier. This is complemented by spells such as Riposte, granting an ally +3/+0 and a Barrier this round, and Brightsteel Protector which also pops a Barrier on an ally. Use these cards to create a board full of buffed units, which you can then use to deal disgusting damage to your opponent.

Want to smash your opponent in the face? Throw away the cards you don’t need while drawing a constant stream of damage until you acquire lethal (damage that kills) with this deck, also courtesy of Hewitt Benson.

Draven’s Spinning Axe is the main feature in this deck as you can create more of them as the rounds roll on. Spinning Axe requires you to discard 1 in exchange for giving an ally +1/0 this round. Use the axe to thin out your weaker units and shift your play towards stronger units and spells. As you create more Spinning Axes, you can deal a substantial damage before your enemy can respond.

Draven’s Biggest Fan ensures you can access and use your champion when needed as it moves him to the top of your deck. Your second champion, Jinx, strikes first when attacking and will continue to give you Super Mega Death Rockets that deal 4 to the enemy nexus and 1 to all other enemies for continuous added value.

Debates rage around Katarina’s inclusion in this deck from v1ci0us, but she’s too powerful to ignore. At just 3 mana, her Recall skill ensures notable early damage and secures a strong starting position. This champion also eliminates the risks of putting all your eggs in one basket with Yasuo’s OTK. Her versatile playstyle just might save you.

Yasuo requires you to Stun and Recall enemies and deals two damage to them. Continuously doing this enables you to prep a huge finishing move that can end the game. Take your already-buffed Legion General, give it Elusive using the Ghost spell and then summon two copies of it with Dawn and Dusk.

If you’re really against featuring Katarina in this deck, replace her with Ezreal. As an Elusive unit, this champion can only be blocked by other Elusive units. Once levelled up, you’ll also deal 2 damage to the enemy Nexus every time you cast a spell.

Thanks to TBGThiago, this Teemo deck is all about planting Poison Puffcaps in your enemy’s deck. When drawn, these deal 1 damage to their Nexus. Use Puffcap Peddler to plant 3 Poison Puffcaps on random cards in the enemy deck. When summoned, Chump Whump creates two Mushroom Clouds which each plant five more Poison Puffcaps. Cycle these cards and continue to generate as many mushrooms as possible. Counterfeit Copies will enable you to pick a card in your hand and shuffle 4 exact copies of it into your deck so it’s unlikely you’ll run out of ammunition. Once you’ve planted 15 or more to level up your champion, Teemo’s Nexus Strike doubles the Poison Puffcaps in your opponent’s deck, which will eat away at their health.

Now all you need to worry about is staying alive. Utilise your spells to remove scary units and marvel at your toxic garden of Poison Puffcaps.

Currently hailed as one of the strongest control decks in Legends of Runeterra, this Hewitt Benson combo is for patient players. You simply need to survive long enough to make it into the late game: then things start to turn in your favour.

Wyrding Stones ramps up your mana from early on and propels you towards a strong late game. Make use of The Ruination to kill all units and Avalanche to deal two damage to all units as you dish out sufficient board clears. You can rely on your plentiful spells to protect you from taking too much damage, which robs your opponent of any real board control. This is where Anivia shines too, dealing 1 damage to all enemies. These steady threats deter the opponent from spreading too wide, which lets you plant a chunky unit such as Avarosan Hearthguard to retain some board presence in the meantime. Summoning the Hearthguard also grants allies in your deck +1/+1, strengthening the cards you’ll play later on.

While a hefty sum at 12 mana, Warmother’s Call is an essential inclusion. Summoning the top unit from your deck the moment you play it and at the beginning of each round, it allows you to copy large targets such as your Tryndameres and thrive over all that damage.