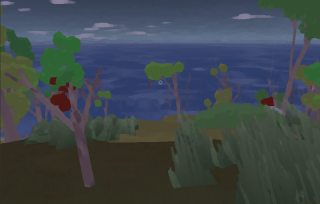 Australia is currently suffering after its hottest year on record, which has sparked widespread bushfires that have claimed several lives, torn through hundreds of homes and blotted out the sky with smoke. For Melbourne-based developer Max Myers, the fires have become embedded in his mind. They're also one of the threats facing the doomed island in his climate disaster game, [soon, only the ocean].

Myers has been working on [soon, only the ocean] since late last year in response to what he sees as the Australian government's inaction when it comes to climate change. Players will be stuck on a dying island that's being swallowed up by the ocean and ravaged by fires and smoke.

australia's on fire, [soon, only the ocean] is a game about the impending/present climate disaster, grief and caring for the dyingadded bushfire smoke, and worsening weather🙃donate to the cfa/red cross: https://t.co/3ukFDpsp0Bhttps://t.co/vCRiIhIdUn#gamedev #indiedev pic.twitter.com/o6pT0hcb4XJanuary 2, 2020

"It's an island with an expiration date," he says. "All that will be left for players after that is a small patch of earth with dead trees on it." The end, unfortunately, is inevitable, but players will be able to at least care for it before there's nothing left. Rubbish can be cleaned up, weather data can be collected and the wildlife can be catalogued.

"At the end of the day the island is doomed and while no one person will save it, you can help make it right in some small way by caring for it while it remains," Myers says. "I want to let people bear witness in a small way to something that will come to pass in a thousand tiny ways all across the world."

The game is fatalistic, but Myers doesn't want it to be dispiriting. "The climate change I wanted to present wasn't something we could fight alone," he says. "It is something that is happening and will keep happening; what matters now is how we deal with this mess and clean it up."

He hopes it will remind people about the stakes and help draw attention to the crisis in Australia, beyond the current bushfires. "Multiple people have called Australia the canary in the coal mine for climate change, and it sure as shit feels like we are choking."

Myers will be donating all proceeds from [soon, only the ocean] to climate change charities. In the meantime, you can support victims of the bushfires and firefighters by sending donations to the Red Cross, Country Fire Authority, NSW Rural Fire Service and a fire relief fund for First Nation communities.