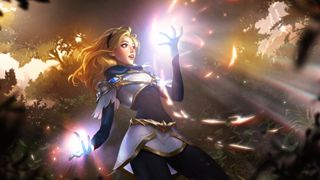 Have you met the Legends of Runeterra champions? Champions create the strong foundations for your deck, similar to legendary minions in Hearthstone. Six champions can be slotted into a deck, including up to three copies of each. These powerful individuals can also be levelled up to upgrade their abilities, and increase their original power and health stats.

I’m here to introduce you to each of the 24 Legends of Runeterra champions. Let's take a closer look at how to use their abilities to get ahead in games, and win matches. Understanding how to build decks around the best cards in LoR will help you to develop your playstyle and encourage you to try out unique builds. Visiting each of the six regions, here are the champions.

Demacia’s champions hit hard, but they also know when to bide their time. Fiora and Garen level up after they attack enemies to assert their aggressiveness and maintain it for the duration of a game. Lucian, despite his Quick and Double Attack abilities, excels in avenging allies, and he must watch them die before levelling up. By contrast, Lux relies on a Barrier for protection and works well in a spell-heavy deck.

The four champions of Freljord are difficult to remove from the board once you summon them, and they do everything in their power to hang around. Killing Anivia sees her transform into an egg, from which she can later revive herself. Ashe harnesses Frostbite to avoid damage and draw cards. Freljord’s sturdiest champions are Braum and Tryndamere: thriving when they withstand damage, the pair dish out even more pain when they level up.

Each of Ionai's esteemed figureheads demonstrate versatility in their range of abilities. Shen dons a robust support role by protecting allies with Barrier. Karma specialises in sorcery and doubles down on her spells after reaching max mana gems. Yasuo is well-versed in stunning enemies and recalling allies to disrupt the balance of the board, whereas Zed prefers to send his shadows to do his bidding.

These Legends of Runeterra champions all begin with 3 power or more and aim to maximise their damage. Attack before regular units with Katarina and Draven’s Quick Attack abilities and continue to generate value from them when they level up. Vladimir is a team player that likes to see others survive: he bases his attacks on the number of friendly attackers on his side of the board and has his eyes set on the enemy Nexus. While Darius’ stats ensure he does just fine on his own, he also relies on a weakened enemy Nexus to realise his full potential.

From shuffling dangerous trap cards into the opponent’s deck to attacking head-on, the Piltover and Zaun champs have their eyes glued on the enemy Nexus. Ezreal directly targets it and is rewarded with fast spells that can inflict damage anywhere. Teemo gradually hacks away at the Nexus by sowing frustrating fungi cards into the enemy deck. Jinx’s Super Mega Death Rockets wreak havoc across the board and Nexus, and Heimerdinger relies on turrets to do the heavy lifting.

The Shadow Isles headliners may possess impressive abilities on their own, but backup is always appreciated. Elise builds an eight-legged army of arachnids to help her out, while Spectral Riders are Hecarim’s buddies of choice. Kalista forges deep bonds with allies that cannot even be broken by death, in contrast to Thresh who has to see units die before he can call upon the help of an attacking champion.