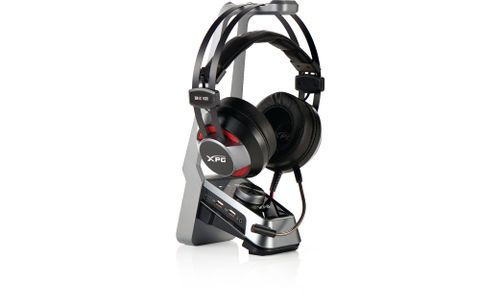 When a manufacturer, new to the subtleties of audio-speaker development, launches a headset, the typical reaction of reviewers is to look like a slapped badger. The effect is compounded as soon as their favorite testing track starts to play, pumping out some indistinguishable noise from those dynamic drivers, nothing like the original clarity of the musical delicacy they once loved.

It’s a sad but all-too-common occurrence that we’ve seen from many a company trying to break into this sector. One of the only manufacturers to buck the trend was Kingston, maker of our pick for the best gaming headset. Its HyperX Cloud took the world by storm, with a fantastic spec sheet and an equally impressive price. It’s still one of the most recommended budget-to-mid-range headsets you can buy today, and with damn good reason.

Believe us when we say, then, that Adata’s XPG EMIX H30, despite sitting in the Cloud’s shadow, is also reaching for the sun. Or trying to, at the very least.

At first glance, the specs look promising. There’s a pair of 53mm dynamic drivers, a sensitivity of 110dB, and an operational impedance of the standard, low-power 32 ohms. All in all, when pumped through the included digital-to-analog converter, it sounds pretty good. You might even say very good, with little distortion, and a well-rounded soundscape, putting ample weight into both the bass and the treble. But then we’d be surprised if it didn’t, given the $200 list price.

That’s a lot of cash, especially for a gaming headset. And although it’s good, it’s got some tough competition, thanks to that effervescent price tag. Beyerdynamic’s Custom Gaming and Sennheiser’s Game One and Zero headsets all come in at a good $10–35 cheaper than the H30, and that’s a problem. Especially when they feature drivers that far outstrip the two powering XPG’s first foray into the market. Arguably, they don’t come with an included USB DAC, but then, to be frank, they don’t need it. They sound good on their own. Just plug and play, and they’re good to go.

It’s not all bad news, however. Thanks to an exceptionally well-cushioned headband sitting astride two self-adjusting rails, the two faux leather memory foam earcups put just enough pressure on your lobes to ensure a snug fit without leaking sound. Couple that with the DAC’s impressive soundscape, and it rounds out the H30s as a good set of cans.

There’s a lot to love—and a lot not to love—with XPG’s first audio outing. Its robust design, inclusive feature set, and exceptional comfort make it a good headset. But that’s the problem. At $200, it needs to be more than good—it needs to be outstanding. The fact that it has to compete against already well-established audio brands, such as Sennheiser and Beyer, at a far higher price, just doesn’t bode well for this boisterous pair of noise-pushers.

Ultimately, if the plucky newcomer had decided to pursue a more robust, affordable headset, with an emphasis on driver quality rather than inclusive gimmicks, it could well have been on to a winner here.