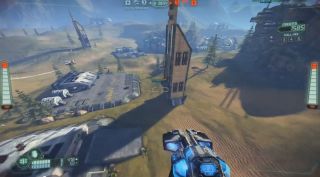 Tribes: Ascend's new Blitz mode (previewed in the video above) is capture-the-flag with the addendum "if you can , mwahaha!" The mode relocates a team's flag base after each capture, often increasing its defensibility. Blitz is currently supported on three maps: Arx Novena, Katabatic, and Dry Dock.

My hope is that by making every capture more difficult than the last, shutouts should be less common in Blitz, and closer games will create more drama and memorable moments. It also should mean that neither team can lazily repeat the same brute force attacks until a few squeak through: tactics will have to change as the match progresses.

Also in the Blitz release, the Technician class gets his equipment update, which includes a remote repair kit, new turret, and new primary weapon; the Dangerous Crossing and Permafrost maps have been promoted to the quickplay queue; and classic Tribes 2 voices have been added. [VGW]! The details on the new mode and gear, as well as the bug fixes and balance tweaks, are in the full patch notes .