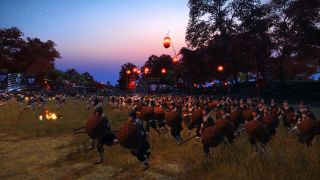 With Total War: Three Kingdoms' impending launch, Creative Assembly has revealed some of its post-launch plans, including a slightly new type of DLC pack and the new Assembly Kit.

"We’re taking a slightly different approach to DLC for TW3K," writes Creative Assembly's James High, "based both on the exciting opportunities the Romance of the Three Kingdoms source material offers us and the preference we know players have for larger DLCs which adds considerable new replay."

Chapter packs will explore different parts of Romance of the Three Kingdoms, with new start positions, events and heroes, as well as some returning characters from the main campaign. They'll sit somewhere between campaign and culture packs in terms of size, though you'll still be playing on the huge map of China and you can expect both new playable factions and mechanics.

So you'll be able to eventually dip into various historical bookmarks, each with different scenarios and obstacles, where the factions may have changed and the heroes are maybe a little older, a little younger, or entirely new.

Mod tools are also on the way, with Creative Assembly planning to release its Assembly Kit for Three Kingdoms shortly after launch. Apparently the new game brings with it an expanded scope for mods, as well as updated tools. It's been in beta with a group of modders, so hopefully when it appears there will already be a few things for players to muck around with.

There's one mod above all that I really, desperately need. Someone needs to mod the faction colours on the campaign map. Trying to plan my conquest of China just isn't as much fun when I'm looking at a sea of browns and greys.