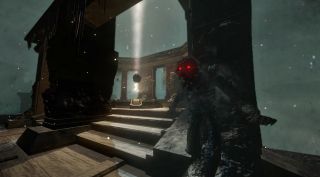 The Flock is an asymmetric stealth-horror game built on an intriguing and risky concept: It will launch with a fixed population—215,358,979, to be precise—and once that population reaches zero, the game will be removed from sale forever. It has a limited lifespan, in other words, and developer Vogelsap literally has no idea how long that will be. But at least we know when it will begin: The studio announced today that The Flock goes live on August 21.

The Flock's baked-in demise was revealed last month, but Vogelsap dug deeper into the specifics, and explained its motivations, in a newly-posted Population FAQ. "Most indie multiplayer games lose their player base within a year. Even heavy hitters such as Titanfall and Evolve have a fast dwindling player base. The most popular games such as League of Legends and Counter-Strike still have a somewhat anticlimactic ending of their players’ experience," it wrote. "So here’s the question we asked ourselves: isn’t it worth sacrificing the ability to replay the game after say two years’ time? What kind of experience will these players be getting? They would come online and find no one to play against or just a few players who are either really good or very new to the game. That’s not a fun player-experience."

The studio said it has a plan for gamers who purchase The Flock late and thus miss out on much of the first-stage action, and also acknowledged that it has no way to stop large groups of players from messing with the numbers via repeated mass suicide, although it expects that the sheer size of the Flock and a built-in respawn timer will keep those sort of shenanigans from having too much impact. Lives lost due to hacking or bots will be restored if and when the cheater is caught, and if the game is successful enough to go multiplatform, the Flock population will be boosted to compensate. Other than that, however, the population will not be touched, and the Flock will inevitably meet its eventual doom.

"The Flock isn’t meant to be and won’t be for everybody," the FAQ states. "We at Vogelsap like to focus our experience into something unconventional and adventurous, which means we cater to a certain audience that is interested in such experiences."