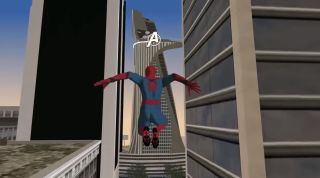 Swinging through New York as a friendly neighbourhood Spider-Man is just about the most satisfying thing you can do in a videogame. When it's done well, like in Spider-Man 2 or the recent PS4 exclusive, it's a hypnotic acrobatic display that's graceful but still lets you go at buttock-clenching speeds. While the latest Spidey outing won't be gracing PCs, modder J16D has rather skilfully incorporated some of its best bits into a GTA: San Andreas mod.

J16D has been working on their Spider-Man mod since 2015, but the latest video shows that the new game has become a source of inspiration, with J16D mimicking some of the animations from Insomniac's game, along with costumes and even the UI.

It looks fantastic. San Andreas isn't quite as vertical as Liberty City, which is based on Spider-Man's stomping grounds of New York, but Spidey still very much looks like he belongs. It's impressive how much of a resemblance there is to Insomniac's version, with movement being almost as fluid, given that we're talking about a pretty old game.

Spider-Man 2, arguably the best Spider-Man game adaptation prior to the latest, came out in the same year as San Andreas, though you couldn't tell from the video. While I still have plenty of fond memories zipping through Manhattan in the early 2000s, J16D's mod looks like quite a step up when it comes to the swinging animations.

There's no word on a release date for the mod, but expect more videos soon. J16D's To Do list includes interacting with objects while in the air, more swing animations, evade animations, combat, wall running and a HUD.