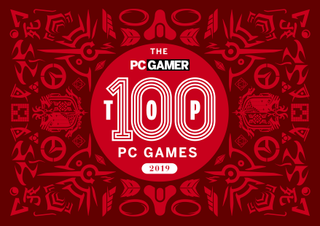 For a constantly updated list of our favorite games on PC, check out our list of the best PC games right now.

Every year, the global PC Gamer team gets together to decide the top 100 PC games. The process is simple: we take last year's list, propose a bunch of additions, tweaks and removals, and then hold a series of hours-long discussions going step-by-step through every suggestion.

Here's the result: a list of what we think are the best PC games you can play today. That caveat—play today—is important. These aren't necessarily the most important or most influential games (if you're looking for that, check out the 50 most important PC games of all time). Every entry in the top 100 is something we recommend that PC gamers play in 2019.

As always, we prefer to celebrate the breadth and variety on the platform, so we've limited ourselves to one entry per game series. We've also included a selection of personal picks—games that didn't make the list, but that individual members of the team still love. Enjoy!

Tom Senior: It’s vague to suggest an adventure game has ‘heart’, but it evokes the warmth and humanity of Grim Fandango’s cast, who in story terms actually happen to be cold and dead. It’s a story of love, friendship, and death-after-death in an afterlife inspired by the Day of the Dead. The puzzles are often nonsense but it’s bursting with jokes and even features a few touching moments. Glottis the big orange demon is the friend we all deserve and Hector LeMans is a terrifying villain.

Evan Lahti: Mount & Blade sandboxiness plus XCOMbat. Your mercs take the form of cute, legless pawn pieces, but it’s the brutality of Battle Brothers that stands out. Your guys can suffer stat-altering injuries like brain damage or a missing nose. It’s refreshing to play a campaign where your trajectory isn’t just steady accumulation of power and loot. The difficulty is all-you-can-eat, and getting on the wrong side of a barbarian or acid-blooded giant worm produces setbacks that you feel for days.

Samuel Roberts: Remedy’s slow-motion shooter is more challenging and interesting than pretty much every cover shooter I’ve played, turning each room into a puzzle that has to be solved (by diving through the air and firing guns wildly). Bullet time became passé a bit too quickly, as slow-mo crept into more and more games to no real benefit, but Remedy’s Max Payne games always did it incredibly well.

Tyler Wilde: I don’t have any proof of this, but I swear I was the first person to post a mod for this game on the official forums. I mean, “mod” might be generous, as I just messed with certain numbers to make bullet time last longer, if I recall, but it speaks to the game’s spirit that it was so easy to mess around with—a better time, if I’m letting nostalgia take over. Cheesy. Silly. Weird. Modable. Max Payne 2 encapsulates what made me fall in love with PC gaming.

James Davenport: Double Fine’s bizarre platformer is still a gleefully grim adventure through the strange corners of the human brain. Psychonauts is a game about nostalgia. It takes place in a summer camp and each level therein takes place in the distorted memories of the people there, little tours of their own hazy recollections; some traumatic, some tragic, others joyful, all lost time. Thanks to the fusion of the formerly massive genres of 3D character-based platformers and adventure games, Psychonauts’ nostalgic qualities take on more power. Deal with the tricky camera and pointless combat for a playful, funny and earnest coming-of-age story.

Jody Macgregor: This horror game about teenagers on a spooky island does have eerie moments—if you’ve ever read about numbers stations you’ll understand the kind of creepiness it’s evoking with its story of radio ghosts. The best thing about it, though, isn’t the scares. It’s the way Oxenfree’s teens talk over each other realistically. You never know when choosing one of the word balloons to respond to their believably teenage banter might break the flow of conversation. Like every teenager, every time you open your mouth you might be jamming your foot in it. It’s hard to talk about Oxenfree’s horror side without spoiling it, but its conversational side—well-written, funny, and with a rhythm that puts most RPGs to shame—makes it worthwhile on its own.

Evan: An asymmetrical, 64-player historical FPS where it actually means something to be on the Red Team. It might cost 200 US Marines to claw your way up the steep, scorched earth of Hill 937, where the North Vietnamese have vision, bunkers, RPGs, traps, and can dig their own spawn points. Fighting through ‘unfair’ circumstances like this with your own faction-specific weapons (helicopters, napalm, the M16) provides a small insight into the brutality of the Vietnam War.

Fraser Brown: The weird, slightly stoned, tragically unfinished sequel to Knights of the Old Republic is Star Wars at its boldest. It is Planescape: Torment to KotOR’s Baldur’s Gate, equally at home with pondering the nature of the Force as it is shooting lightning at Mandelorians. It takes a bit of effort getting it working well—you’ll want the unofficial patch at the very least, but some of the cosmetic mods are worth a look, as well—but the reward is one of the best Star Wars stories ever written, and a cracking RPG to boot. Word of warning: if you do decide to go down the Dark Side and take all of your crew with you, be prepared for some guilt pangs. It’s brutal.

Evan: Messy, unfair, and brutal, just as medieval warfare was meant to be. I love the way that Mordhau makes kill-stealing a certifiable skill—I take pride in being that guy who can whirl his zweihänder into a steel party-in-progress and decapitate someone who’s already engaged (without gutting my teammates, usually). Likewise, it’s the heroic fantasy of winning outnumbered fights, of dancing around four dudes who are poking at you with spears and still being the last one standing. Also: the heroic fantasy of clubbing a Templar with a frying pan.

It’s a shame it’s being undermined by an unusually toxic community and the absence of a modern player reporting system. Triternion’s response to this unchecked tire fire is pretty 13th century.

Tyler: Brutal. There isn’t another rhythm game like it.

Tom: You play a silver pill hurtling into the mouth of a god. You bounce through turns to protracted, nightmarish rhythms in an ethereal landscape. It’s beautiful and uncomfortable at the same time.

James: Talking about Thumper requires describing it as a abstract sensory experience. But strip away the arcane sheen and what’s left is one of the most intense games ever made.

Tim Clark: It’s easy to see Hearthstone as embattled on multiple fronts these days, what with the current fad for Auto Chess draining the game of streamers and the rise (at last) of a serious competitor now that Magic: The Gathering has a digital version that doesn’t look like Excel. But for all those travails, it’s also easy to forget how much Blizzard’s colourful card battler gets right. And recently, with more active card balancing and the first range of buffs we’ve seen since the beta, the game has felt more vibrant than it has for a long time.

This year’s Rise of Shadows expansion was followed by the best single-player mode Team 5 has created yet in The Dalaran Heist, which provided a welcome outlet for those of us who like to build meme decks without having our heads brutally kicked in on ladder. Next up is Saviors of Uldum, which sees the return of the League of Explorers—the most iconic heroes Blizzard has designed without drawing on existing World of Warcraft lore.

Still, the game is in danger of slipping out of the top 100 for the first time. In order to retain its place, Blizzard surely needs to implement a bigger feature shake-up, including revisiting the tournament mode that it mothballed last year. Oh, and nerf Dr Boom Mad Genius. I definitely did not order all these bombs.