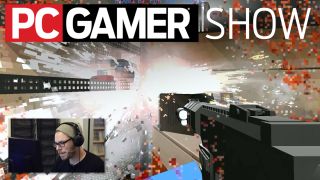 It's The PC Gamer Show! In episode six, Evan and Tyler play indie tactical shooter Due Process, Andy subjects the office to Cyberspace on the Oculus Rift DK2, and we say goodbye to a friend.

The PC Gamer Show is a new and evolving project for us, and we want your feedback to help make it better. What kind of segments do you want to see? What games should we play and talk about? Who should we have on as guests? What's coming up next?

Shout at us in the comments below, or shoot us an email directly at letters@pcgamer.com. We're listening. And we'll see you in two weeks.