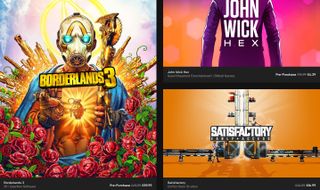 The Epic Games Store is hosting its first big sale today, running until June 13. The store's catalogue has been reduced by up to 75 percent, and every game you purchase that's over £14/$15 will have an additional £10/$10 knocked off the price.

During the sale, Epic's increasing the cadence of free games, kicking it up to a new one every week, so check back next week to see what comes after Stories Untold. It looks like they'll still remain free for two weeks, as per usual.

It's a good sale, especially with that extra 10 quid discount, and it's fortunate that it's started after Epic decided to add the inexplicably absent search feature. There is still a dearth of features, but it's getting a bit better.

Got your eye on anything?