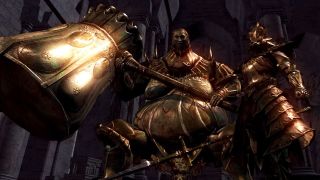 The Dark Souls remaster has arrived! While it seems a bit needless on PC where we have mods and super HD monitors already, we need barely any excuse to go on and on about the Dark Souls series.

They are still incredible games with outstanding boss encounters. Well, mostly outstanding. Artorias is a beautifully designed doomed knight who will give you the fight of your life, but Covetous Demon is a poo with a face that tries to roll over you. Which are the best? Which are the worst? We put our opinions onto the internet below, give us yours in the comments. Beware spoilers ahead, too—Dark Souls bosses are important to the plot. Thanks to the boss fight database Youtube channel for the vids.

It wasn't until I faced Artorias that I became wholly invested in the lore of Dark Souls. I was suddenly face-to-face with a living relic of Lordran's past (as alive as anything gets in Dark Souls, anyway). Artorias was the subject of every whispered fable about the battle against the Abyss, and I had been there, and survived what he had not. Suddenly all those stories were more than history to read about in item descriptions: they were present, right in front of me, in the form of an insane, extremely pissed legendary knight.

By Dark Souls 3, the fight with Artorias wouldn't stand out. But at the time, he was fast and vicious and lithe where most of Dark Souls' bosses were towering monstrosities. Fighting him felt like fighting a human player, but with faster reflexes and more powerful attacks. It was intense. Panic-inducing. A duel, not a battle against a behemoth. By the time you face Artorias you've likely mastered the game, but beating him still feels like the ultimate accomplishment. You've faced down the greatest character in Dark Souls lore and given him the warrior's death he deserves. —Wes Fenlon

I've written about my love/hate relationship with Dragon Slayer Ornstein and Executioner Smough before. To recap, it's like this: no matter how many times I beat the first Dark Souls—a number I've genuinely lost sight of at this stage—I'm yet to better the Four Knights captain and his big mate first time without the help of Solaire.

And I've developed a complex. One of my favourite moments in Dark Souls is catching that first glimpse of Anor Londo, a moment that's perpetually overshadowed by my own inadequacy. You've hoofed it up Sen's Fortress, taken down all those Royal Sentinels and Batwing Demons and have maxed out your lightning halberd? Tough shit, you've still not worked out the attacking patterns of these two (three, including the pair’s final form) juggernauts. At this point, it looks like I never will—which is partly why I love Ornstein and Smough. Besides being one of the series' most epic showdowns, my own inability to topple them keeps me coming back for more. —Joe Donnelly

I'm not particularly fond of the Wolnir fight itself, but I love this character's lore. Enough that the big man is deserving of his place on this side of the best/worst divide. A one-time conqueror and ruler of the Catacombs of Carthus—whose skeleton race is known for their curvy swords and black magic—Wolnir has succumbed to The Abyss. Like much of the series' ambiguous mythology, it's unclear why this has happened but is most evident during the fight itself—him, lurched over a knife-edged clifface, spewing murky gunk, and raising the dead while clutching his Holy Sword.

Break Wolnir's glowing bangles, and he's swallowed by the shadows. Granted, doing so feels more videogamey than Souls games normally permit, but watching the bastard consumed by the blackness remains one of my prouder DS3 moments. Despite the reams of Souls analysis out there, I'd love to see more on The Abyss as I find its mind-warping properties fascinating. —Joe Donnelly

The fight with Yhorm the Giant is as Dark Souls as they come. Yhorm is huge, deals vast amounts of damage, and requires a special sword, the Storm Ruler, to be defeated. Plot twist: said sword lives at the far end of Yhorm's chamber. Which means this battle kicks off with a frantic dash and a furious inventory shuffle - before you can then consider, you know, killing a bloody giant.

Siegward of Catarina's sidequest is worth completing before taking on Yhorm too, as he'll accompany you during the showdown. He refers to the giant as an "old friend" and that he's come to fight the Lord of Cinder in order to "uphold [his] promise". Likewise, Siegward carries his own Storm Ruler. This fight has it all, then: a frenetic David versus Goliath-esque battle, special weaponry, and some deliberately ambiguous lore tie-ins.—Joe Donnelly

The Looking Glass Knight might be my favourite Dark Souls boss, despite featuring in my least favourite game of the series. One-on-one, the fight is straightforward: the knight's hulking sword swipes and cumbersome stomps are easily telegraphed. When you get its health down to a certain level, though, it summons an NPC or, better still, another player via its mirrorer shield. This changes the dynamics of the battle - particularly when matched with a human player.

Moreover, NPCs can choose to heal the Looking Glass Knight, or even turn on the boss and help out the player they've been sent to attack. All told, this is a neat spin on the series' summoning mechanics which turns an otherwise cookie cutter boss battle into a messy free-for-all. The Knight's Ring of Steel Protection is a handy drop, too. —Joe Donnelly

Is this three-phase bout the most challenging boss battle in the entire Soulsborne series? With the exception of Bloodborne’s Orphan of Kos, I think so. Housed within the Ariandel Chapel of Dark Souls 3’s gorgeous Ashes of Ariandel icy sprawl, Sister Friede leverages a deadly frostbite-inflicting slash attack. Father Ariandel joins her in her second phase, and while both combined are weaker than phase one—despite the size of the old timer—Sister Friede then begins healing. Which is really, really annoying.

And of course just when you think it’s all done and dusted, Blackflame Friede jumps in with more Magic, Fire and Dark damage slashing. She’s in beast mode at this point, and I don’t care to admit how long this stage took me to overcome. Even with Slave Knight Gael’s backing—a summon who James discusses in more detail below. —Joe Donnelly

I already wrote an entire article about how much I like this boss, so for a longer explanation give it a read. By the time you reach him, he’s a former friend gone mad, a peasant who went in search of the pigment of the Dark Soul for his niece, an artist attempting to paint a newer, better world. In an arena set far into the future, right before the remaining pieces of the world dissolve into ash, you fight Gael amidst the empty thrones of the pygmy lords, all of whom he just finished ripping to shreds in his search. In your years apart, Gael grew quite large, his cape now imbued with dark magic and his biceps infused with mad gains. It’s metal as fuck.

He’s basically Artorias 2.0, a human opponent with rhythmic attacks and impressive agility. But after his health bar reaches the halfway point, he increases the speed and ferocity of his introductory melee attacks and throws in some spells for good measure. The result of one hell of a climactic duel that ramps up slowly enough to teach you as you fight. By the time you reach the spell phase, dodging the melee attacks will feel effortless, and after a death or two to boomeranging coronas, avoiding the spell attacks will be just as simple. Gael is everything I love about Dark Souls’ infamous ‘difficulty’ condensed into a single fight. Pay attention, be persistent, and you’ll surprise yourself. —James Davenport

I still regularly think about how well Dark Souls 3 ended. I never played the DLC, but the Soul of Cinder, the final boss of the main game, was a meditation on Dark Souls as a series and Dark Souls 3 as a sequel. Dark Souls 3 is not as fresh as the first game, because how could it be? It has to retrace some of the same steps, work within the same aesthetic, but it makes that weakness into its theme. The whole game is about continuing or breaking this unending cycle, and the Soul of Cinder represents you and every player who's gone before you. It shifts from style to style, one moment a knight, another an assassin, the next a cleric. It's shockingly poetic for a battle against a giant with a flaming sword. —Wes Fenlon

I agree with everything Wes says here, and would add that the play on Gwyn’s boss theme in the second phase of this fight is wonderful. This nod to the first game, and to a time cycle doomed to repeat itself, made the hairs on the back of my neck stand up. A fitting conclusion to the base game trilogy. —Joe Donnelly