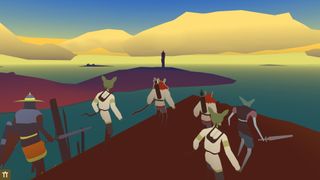 Tenderfoot Tactics is a tactical RPG full of magical goblins trying to outrun the end of the world. They'll have to fight to survive, but thankfully they've got flashy elemental powers that let them manipulate the battlefield and their attacks always hit.

Who among us hasn't openly wept when a point blank shot inexplicably misses an alien in XCOM? There's none of that in Tenderfoot Tactics. The deterministic combat system means that every attack will hit and do the indicated damage, so your plans won't be foiled by RNG.

That's not to say that things will always play out as you expect, however. While you can command the elements, raising mountains or boiling lakes, developer Badru warns that nature is "complex and fickle" and that you might regret, say, setting fire to a forest. Who could have possibly known?

Fights play out on a turn-based grid, but outside of combat you can explore the pretty, low-poly open world. You and your tribe can march across it, hop on a ship and, thanks to some magic, explore the skies as a bird. It's not just a trick for Assassins.

It's still in development, but today you can get a taste of it via the free prologue, The Foreverlands, when it launches on itch.io. The Foreverlands will introduce the world of Tenderfoot, as well as letting you check out the first seven classes.

The full game doesn't have a release date yet, but it should be out by early 2020.