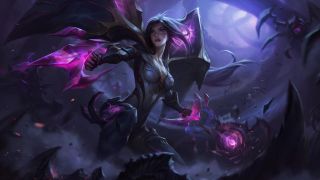 Riot's autobattler Teamfight Tactics was an immediate hit when it debuted in June, and in July the studio confirmed—unsurprisingly, given its success—that it would be a permanent League of Legends game mode. Today it announced that it's going even farther by committing to the creation of Teamfight Tactics competitive scene starting in 2020.

The demand for competitive play seems self-evident, as ranked games are played four times as much as standard. "The mode is incredibly resonant in some of our most competitive regions like Korea," Riot said. "We want to provide an experience worthy of the players that have dedicated themselves to being the best in the world."

Riot also threw out a few numbers to illustrate why it's leaning into the mode so soon. Teamfight Tactics pulls in more than 33 million players per month, and has accumulated 1.725 billion hours of playtime since launch, 720 million of which came in just the past 30 days. League of Legends' global average peak concurrent player count increased by 30 percent when TFT went live, while China specifically—"by far" the region with the most LoL players and hours—saw a 35 percent growth in total game hours.

"We’ve shipped a variety of game modes over the years, and Teamfight Tactics is the first one since ARAM [All Random, All Mid, a PvP mode launched in 2012] to show the potential to be a huge, long-term addition to League," Riot said. "As a result of your continued excitement for the mode—as seen by the hours you spend playing, watching, and talking about it—we feel confident in really doubling down on TFT’s development. We’ve started working on some pretty big plans to make this an experience you want to invest in for years to come."

Riot also said that the release of the 9.19 patch, which adds the new champion Kai'Sa and the Sparring Gloves item, marks "the last of the major gameplay changes for Set 1 of Teamfight Tactics." An analysis of the lessons learned in that set, and how they'll be applied to Set 2 in October, will be released later.