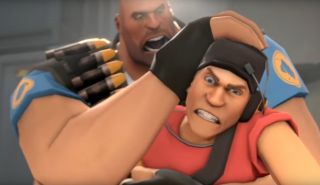 An influx of rare items is playing havoc with Team Fortress 2's economy. Unusual quality items are appearing in a high number of crates and the marketplace is starting to be flooded with them, driving down their price. Today, a warning went up on the unofficial Team Fortress 2 subreddit telling players to stop trading items until the glitch is fixed.

"There have been numerous reports, and sightings in the wild, of an apparent serious economy flaw that is resulting in the guaranteed uncratings of Unusual quality items," wickedplayer494 wrote. "As a result, demand for certain types of crates believed to be affected has soared, and supplies of Unusual quality items are flash flooding the market."

Wickedplayer warns that unsanctioned real-money trades taking place outside of Valve's official Community Market are especially high risk at the moment, though dabbling in any grey market comes with lots of risks.

While Valve is yet to confirm the glitch, its impact is already being felt by the 12-year-old game's still lively economy. A quick hop over to the Community Market shows the significant increase in Unusual items. Good news for people hoping to get a sweet hat they've never been able to afford, but probably less so for people who treat Steam trading like a second job.

Take a look at the Unusual Birdcage above. It's a level 10 hat that's exactly what it sounds like, a birdcage you can plonk over your head. Over the last month, it's sold for anything between $19 to $110. Sales are often all over the place as people who don't know the value of the item chuck them in the marketplace for a quick buck, but today saw it hit a new low, going below $4. So far, 89 of these hats have been sold just today, compared to 20 across the last month.

Right now, most likely as a result of a surge of people attempting to cash in on the previously mentioned economy flaw, TF2 has approximately 15K more concurrent players than at this time yesterday, and ~10K more than this time last Friday. https://t.co/2QQOKrTSxN pic.twitter.com/rCfYeAI2eJJuly 26, 2019

With players and presumably less scrupulous sorts getting wind of this exploitable glitch, Team Fortress 2 has seen an explosion in concurrent players. It's been teetering around 60,000 players or just below, but today saw that leap to more than 90,000. People love their hats. And a fat Steam balance. You can see the most recent numbers at SteamDB.

Even if Valve manages to fix things today, it's unlikely the Community Market will recover quickly, if at all, with all these additional and once incredibly rare items floating around. Perhaps more drastic measures will have to be taken, but I expect there will be a lot of pissed off people if their sales get reversed.