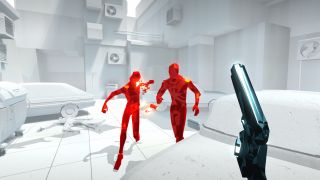 The latest giveaway in Epic's 12 Days of Free Games is Superhot, the first-person shooter in which time slows to the consistency of melted cheese, only speeding up when you choose to act. Phil Savage gave it an 84 in his review when it came out back in 2016, describing it like so:

"Superhot makes bullet time feel fresh. This is more than a slo-mo gunfight—by inextricably linking distance and time, the most convoluted action sequences are made possible. You'll sidestep bullets, throw objects and shoot at the point you hope the enemy will eventually be standing. It works because the rules are so consistent. There's no reloading, but throw an object at an armed enemy and they'll drop their weapon. You replenish ammo by getting a new gun—throwing your empty one at an enemy, and grabbing theirs. I've done this many, many times, and it never stops feeling badass."

You'll have to grab Superhot today because another game will be free tomorrow, and the teaser image on the Epic Store shows a little matchstick burning away. My guess would be that Little Inferno, the cheery Burton-esque game of pyromania capitalism, will be tomorrow's freebie.