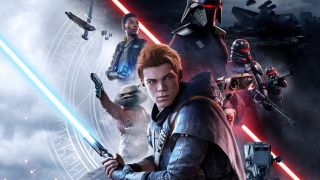 Blockbuster action games like Uncharted are arranged in such a way that your eyes have no choice but to take in all of the many million dollars the studio spent making every landscape and climbable ledge.

I came into my hands-on time with Star Wars Jedi: Fallen Order at E3 expecting more or less George Lucas' Uncharted: a gorgeous-but-conventional, linear Star Wars action game. But what I played had a few, unexpected shades of Metroid's backtracking or FromSoftware's secret areas.

To be clear: Jedi: Fallen Order is not an open-world game. You've got your own ship, the Mantis, and anytime that this ship is accessible to you, you can walk inside, visit a holotable to bring up a galactic map, and jump to one of the other planets you've visited. But (despite the presence of a crew on that ship that you can engage in some simple 'either-or' dialogue with) you are not going to be zipping between these worlds like Mass Effect, running side-quest errands.

Instead, traveling between planets in Jedi: Fallen Order seems to be in service to your own playstyle around upgrade accumulation and completionism. "Basically, a lot of the time you'll go to a planet you'll play through a chunk of it and you might run into a wall," says Justin Perez, senior game designer at Respawn. "Or you might just decide like the enemies in the section are a little too strong. Go back to your ship. Go explore somewhere else. Come back, maybe you now you have Force Push. And those enemies are weak to Force Push."

Though Jedi powers like Force Push unlock in tandem with plot progression, smaller upgrades along Padawan Cal Kestis' skill tree are purchased with skill points, one of a couple different collectible resources that feed into Fallen Order's backtracking and modest non-linearity. You can find audio logs, as well as cosmetic skins for Cal's shoulder droid BD-1, the Mantis, and Cal himself.

In the demo I played, I encountered an uncrossable gap inside a mud-covered base. After discovering a workbench that unlocked the Droid Overcharge ability for BD-1, was I able to then return to this area, zap a control panel with BD-1, and wall-run across a new panel that rotated into place in order to move forward.

"Sometimes, you'll need to open a gate in order to progress through Cal's main adventure. But other times, you'll have to open the [locked] gate to, you know, you might find a miniboss in there, and then maybe one skin that you can apply. So there's a lot of customization stuff that you'll find in those optional paths. You can upgrade your lightsaber hilt, you can change that. That's all kind of off the beaten path."

Respawn isn't saying yet how many planets will be in the game, but my playthrough was on Kashyyyk, and the announcement trailer revealed that Bracca is where protagonist Cal Kestis sneaks away to after the Jedi massacre kicks off.  About half of the planets in the game will be new to the Star Wars universe.

Secret areas and alternate paths also seem to factor into combat. Near the end of my demo, I stumbled on a firefight between five or six stormtroopers (including one with a flamethrower), and some giant Kashyyykian spiders, all brawling together without noticing me. I got my ass kicked when I waded into the fight, only escaping by hitting the d-pad to spend the Jedi equivalent of Estus flasks and restore my health. It turned out that I could've avoided this carefully-designed encounter entirely.

"It's hard to see because it's dark, but there's a way you can sneak into the caves on the left," Perez tells me. "And you can just let that whole fight happen and not even participate at all. Inside the cave, there's a Force Echo, which is one of the things that Cal can tap into little spots where the force is … they're sort of like audio logs."

I don't expect Fallen Order to fully embrace FromSoftware's approach to secrets and hidden areas, but it's encouraging that the inspiration and influence is making its way into what I expect to be a more mainstream action game.

Respawn's approach to combat is likewise influenced by FromSoftware. It was fun playing a deliberate Star Wars game where button-mashing meant death against anything but the lowest-tier enemies. Fallen Order is much more forgiving than Sekiro, but I still had to precisely time parries and read long wind-up animations, like a health bar-breaking, unblockable grab from a durable KX security droid.

I'm curious how this more careful lightsabering will jive with Cal's power upgrades—will he be chucking Force Lightning by the end of the game, or acrobatically pinballing around like Yoda? My guess is that his power will be a little more restrained than that, given the deliberate fighting style that Respawn is leaning into.