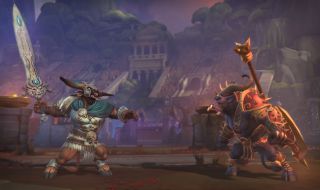 Earlier, Hi-Rez mentioned that Arthur's got a new melee combo style and more fluid way of fighting. He moves differently from other gods in Smite, Walker explains, and thanks to his lower cooldowns, he can chain his attacks together into a melee combo; something that would look more familiar in an action game. That's the main inspiration here. "It's our love letter to action games," says Yu.

That's always been something that has set Smite apart from its competitors and fellow MOBAs—it's always leaned into the action more, from the third-person camera to the aimed attacks.

Merlin, on the other hand, uses his magic rather than martial prowess.  Thanks to his three stances, each giving him access to new elemental abilities, he has access to more than normal. It sounds like he'll be a bit of a tricky one, with players needing to study three characters in one, almost, but Walker reckons we'll be able to have fun just jumping into a match with him.

“To master this character you’ll need to learn a lot, but he’s really fun to just pick up and play, as well, because the stances are really intuitive and we’re using core magic—game magic—rules that people will understand.”

Hi-Rez isn't ready to reveal much about the second pair, Horus and Set, which are further off.  "Horus and Set are fan requested gods," says Walker. "They’re ones that don’t necessarily come up in the discussion without the fans making it so clear that they want them, which is great. We’re still in the really early stages of their discussion, so I don’t want to say too much, but we’re just going to try to do something different."

Yu thinks of them as the embodiment of the battleground of the gods; two deities stuck in a contest for the throne. They're kind of a perfect fit for Smite.

Original story: Smite, Hi-Rez’s deity ‘em up, is getting quite a bit bigger. Today, the developer announced a Switch version, cross-platform play and progression, a bunch of new heroes and gods and, finally, a new map for the popular arena mode. Good heavens!

You might not be particularly fussed about the Switch version, though I confess that I’d have a lot more time to duke it out in Smite if I was able to play on the train or while I’m sitting on my porcelain throne. The important bit is that with this additional platform, Hi-Rez is letting everyone fight each other and keep their progression, whether you play on PC, Xbox One and Switch.

Onto the new gods! Well, not all of them are gods. The 99th and 100th characters to join Smite’s mega-pantheon are King Arthur and Merlin, who probably don’t need much of an introduction.

“Reaching God 100 is a key accomplishment for Smite,” said lead game designer, AJ Walker. “We wanted something that was different but would fit within Smite's rules of mythology and legendary characters. That's where we landed on King Arthur and Merlin the Wizard.”

Arthur’s a melee character who boasts a new style of melee combos and animation. Merlin is, of course, a mage, and he can alternate between three different stances, allowing players to command three magical elements.

Hi-Rez also name-dropped a pair of Egyptian deities: Horus and Set. The son and brother of Osiris, respectively, are probably two of the most well-known of the Egyptian pantheon and their absence in Smite, which has a vast number of gods, has not gone unnoticed. We don’t know anything about their MOBA counterparts yet, but Pip will be chatting to Hi-Rez later today, so hopefully we’ll find out more soon.

Smite’s 5 vs. 5 arena is the MOBA’s most popular mode. It strips out the towers and Titans, simply letting players concentrate on beating the divinity out of the other team and their minions, reducing the enemy’s ticket counter until it hits zero. There are some additional wrinkles, though, like escorting minions to portals. From today, arena gets a new map, and you can take it for a spin right now.

The new arena is built around the battle between Hera and Bellona and features a new enemy, the Minotaur, which will lead minions on an attack of the opposing base. Hi-Rez also promises improved clarity to go along with the updated art style. A free arena bundle is being given out to celebrate the launch of the new map for a limited time, too. The bundle features seven gods and a set of skins. Meanwhile, the Ultimate God Pack, which unlocks every god in the game, including future releases, has been heavily discounted.

Keep your eyes peeled for more news from the Hi-Rez Expo.