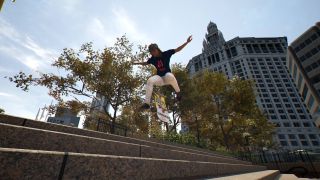 Before landing my first kickflip, I fell on my ass hundreds of times. I thought the muscle memory would never catch up with my teen dream to do something cool on a wheeled piece of wood, but one evening in the Pizza Hut parking lot, the sun setting, snow falling, it happened. Pop, slide, spin, slam—I landed a kickflip.

Practice aligned with confidence and I did the thing as if I’d always done the thing. A frustrating process gave way to pure joy. Suddenly, I was a real skater boy rolling around with something like prestige, my ass now radiating pride with the pain.

Skateboarding videogames have been great at capturing the fantasy of being a kickflip master, but skip out on how to get there in the first place. In Tony Hawk’s Pro Skater, you’re what Tony Hawk dreams about at night, a skateboard superhero pulling off 900s and darkslides and Christ airs with the ease of an incoming fart. In EA’s Skate, things tip towards realism, but waggling the analog stick about spits out advanced flip tricks like they’re on a factory line.

But Session, a new Early Access skate sim from Crea-ture Studios, treats the arduous process of learning to skate with as much love as actually being a skateboard pro. And it does so with a bonkers control scheme guaranteed to turn away—disgust, even—the most dedicated genre fans.

Turning is assigned to the left and right triggers—the scheme is so distinct that it only supports gamepad play—to simulate leaning to shift weight from one side to the other. It feels pretty bad at first, but then so did wrapping my brain around how to look and move in a first-person shooter with a keyboard and mouse.

So, to perform the most essential manoeuvre, an ollie, players move the right stick down, just as a skater would with their right foot to pop the tail, and swipe the left stick up to kick the board up with the left foot.

For a kickflip, the left stick-foot needs to hit the edge of the board, so rather than swipe up, players swipe left. To spin the board in order to pull off shove-its and varials, the right stick-foot needs to scoop rather than pop. A 360-flip takes a hard clockwise spin of the right stick and a leftward swipe of the left stick. Pulling off basic tricks is difficult, but all the more gratifying to master.

My first hours of Session are spent noodling around in a parking lot, barely moving, committing the basics to muscle memory. It sounds boring, but the way the control scheme slowly becomes second nature is a rare feeling—one that isn’t exclusive to videogames.

Things are made more complicated by a ‘free grind’ system. THPS and Skate lock the player to edges and rails marked as grindable surfaces, meaning if you approach the rail from just about any angle with some amount of momentum, you’ll snap to it and get to sliding. In Session, edges and rails aren’t coded as grindable surfaces because literally every edge and rail is free game. But as a result, the player isn’t coded to snap to them.

A perfect angle of approach, speed, and height are required to begin a grind, and even then you need to treat each stick as the weight pressing down on each end of the board to stay balanced. 50-50s, the default grind in most skating games, require pressure on the front and back of the board. To pull off a nose slide it takes a perfectly timed ollie and 90-degree turn, perfect spacing between the surface and the board to land the flat part of the nose on the surface, pressure on the nose-stick, and no pressure on the tail-stick.

It’s a lot to think about for such a simple move and exactly why it took me about 20 minutes of kissing pavement to land my first noseslide. But the feeling brushed up against my early days of skating, proof that persistence pays. Simple tricks don’t just look cool, they’re built on the back of dozens of failed attempts. Every new trick mastered is a major win—a victory as big as beating any Dark Souls boss.