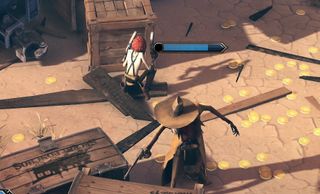 It's been almost exactly a year since we declared in our Early Access review that Secret Ponchos, the Spaghetti Western-themed PvP shooter, was "pretty neat." There were occasional bugs and it was sometimes hard to find a decent match, but overall our outlook was optimistic. "[Developer] Switchblade Monkeys Entertainment should be able to use Early Access to address these issues and deliver a small, competent, and unique game," Emmanuel wrote. We'll soon find out if he was right.

Switchblade Monkeys announced today that the "new and expanded" Secret Ponchos: Most Wanted will be released for the PC on September 29. The updated game now has a roster of ten unique outlaws, double that of the original, each with unique weapons and style of play. There are also new game modes supporting one-on-one duels or gang showdowns for control over the town of Lonetree. A single-player practice mode against bots is now available, and bots can also be inserted in "lower level" Domination and Deathmatch modes, so you won't have to wait so long to start killing things.

Secret Ponchos was released for the PS4 in December of 2014, but it's actually been on Steam Early Access since June of that year, and development has continued since. Switchblade Monkeys acknowledged at the time that it's an "unconventional" situation, but said that it's necessary because the Steam release will not be just a straight port of the console version. It also confirmed that owners of the Early Access version of Secret Ponchos will be upgraded to the Most Wanted edition at no charge. More information about the game can be found at secretponchos.com.