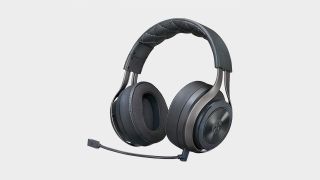 Save over $80 on a big, comfy wireless gaming headset at an all-time low at Amazon. (Image credit: LucidSound)

The LucidSound LS41 wireless gaming headset is currently on sale at its lowest price ever via Amazon for $119. It's not every day a pricey wireless headset is available at a cost that won't upset your wallet. The listed retail price is $199.99, but the headset has been selling around $160 for the last month—not a bad deal for a comfy wireless pair of cans that sound pretty good.

We were mostly positive on the LucidSound LS41 in our review last year despite having some capability issues. One thing we like about it is that the ear cups can rotate a few degrees in either direction to take the pressure off your temple, which is ideal if you wear glasses. Eyeglass-wearers know the struggle when it comes to finding a headset that won't give you a headache after an hour of gaming.

The headset uses 50mm drivers with a 20Hz-20Khz frequency response for some dope audio. The detachable boom mic the LS41 has is one of the better ones out there we've tested—and when you play competitive games that require extra coordination like Apex Legends or PUBG, a decent mic is crucial.

7.1 virtual Dolby Surround is a great extra feature, but you need to have a Dolby Digital-supported sound card in your PC for it to work correctly with the LS41. If you don't have one, you'll have to settle with 5.1 surround sound on PC and PS4. Not a dealbreaker, but something to consider if you're in the market for a wireless gaming headset and you want the best sound possible. For other ideas, check out our list of the best wireless gaming headsets we've gotten our hands-on recently.

LucidSound LS41 Wireless Gaming Headset | $119.50 (Save $80.49)
A big comfy pair of cans with 7.1 surround sound that comes with a decent microphone at an all-time low price. View Deal