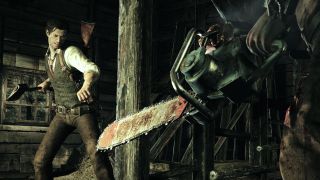 There have been rumours for a while now, but it's looking highly likely that Bethesda will announce a sequel to The Evil Within at its E3 press conference that takes place in a matter of hours. An ad has appeared on Reddit before it was supposed to, announcing that The Evil Within 2 is now available for pre-order (it isn't), while linking to the official Evil Within site, which doesn't yet have anything on it about the action-horror follow-up.

I've been refreshing the PS4 subreddit (where the advert has been seen) for the past few minutes, and I've not been able to make it appear, so it seems to have been taken down for now. Here's what the ad said while it was up:

"Bethesda returns you to the nightmare in The Evil Within 2. Now available for preorder. How will you survive?"

Gematsu reports that it has seen a second ad, which contained the following text:

"From survival horror mastermind Shinji Mikami comes The Evil Within 2. Now available for preorder. ‘The only way out is in.'"

So if the advert is legit, it seems that Shinji Mikami—director of the original Resident Evil, and of the first Evil Within—is still attached, which is great news. The Evil Within was quite uneven, but it had some tense chapters, and some extremely pleasant art direction, so I'm very interested in a sequel.