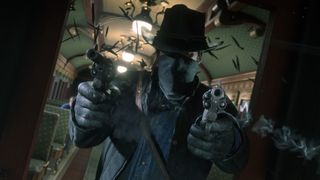 There's a simple reason to care about Red Dead Redemption 2 on PC: Rockstar makes some of the most beautiful open worlds in gaming, and they look their very best on PC. Story-wise, it's a game about outlaws trying to find stability and a sense of family in a violent, chaotic world. It's also a game about riding horses through sunsets, playing poker in warmly lit saloons, and getting into fistfights with drunks in muddy avenues. I visited Rockstar this week to enjoy that ambiance on PC and, at one point, accidentally run over a dog. Sorry dog.

Let's talk about the technical stuff. The build ran at a solid 60 frames at 4K resolution on a mix of high and medium graphics settings. The PC version features improved volumetric lighting, which means lots of lovely dour god rays in the Bayou areas of the map. Improved tessellation means more detailed terrain and extremely convincing mud. Improved draw distance means you can see the glittering lights of Saint Denis at night from miles away. There are smaller touches too—you now cast longer shadows as the sun sets.

You can capture these details in a new photo mode, which is a great addition to a game determined to create a sense of cinematic spectacle. It has the features you'd expect. You can move the camera up to 25 metres from your character, tilt, zoom, pan, change focus and choose from a variety of filters.

Collectively, these updates hone Red Dead's wistful atmosphere. I rode into Saint Denis and wandered around in first-person view. After nearly being hit by a tram, I wandered into a saloon and ordered a whisky. The well-to-do clientele muttered comments about my appearance as I walked past, and I suddenly remembered I hadn't washed since my muddy fistfight back in Valentine. Rockstar's attention to detail goes beyond the finely textured wood panelling in this slick saloon. Everywhere I go NPCs notice me, muttering "good day" on the trail, warning me not to cause any more trouble after brawling in the street and trampling that mutt. Sorry again, dog.

Exploring in first-person is much better on PC thanks simply to well-implemented mouselook. Pad controls are borderline sluggish, seemingly to give your actions a sense of heft that fits Red Dead Redemption 2's methodical pacing. It's great to be able to quickly look where I want to without dragging my view around with a stick. It also means you can play the game as a legitimate FPS. Naturally, the game switches off the pad's auto aim when you start playing with a mouse, and you can switch freely between mouse and pad if you prefer riding a horse with a controller.

The combination of 60fps performance and mouselook significantly changes the way the game feels to play, which to me matters more than visual improvements to a game that looked great already. As a PC player I'm used to being able to dart around with my view and react to the game world with almost unconscious flicks of the mouse. Pad look creates a small amount of friction between my intention and the way the game responds to that intention. Removing that friction simply makes the game feel better to me.

The controls are customisable too, as you'd expect. You can alter FOV settings to your taste and rebind keys. The radial item selection menus will take some getting used to, and for the sake of my fingers I'd rebind the slow-mo 'dead eye' trigger from middle mouse button to a side button. Otherwise Red Dead seems to have transitioned to PC nicely. Performance is the big unexplored issue. Rockstar says the game is highly scaleable. We look forward to testing it on a few different rigs.

The game will launch with a few extras. I'm most excited about the addition of three new bounty hunting missions, one of which asks you to capture a man called Bart Cavanaugh dead or alive from his camp of outlaws. There are a couple of new gang hideouts to raid, new treasure maps, new guns (some ported into singleplayer from Red Dead Online), and lovely new horses.

Rockstar confirms that Red Dead Online will be live on PC at launch, and this may end up being the most fascinating part of the release. We've had lots of fun in GTA Online, but the mode has suffered from egregious hacking on PC. The fantasy of Red Dead Online—riding forth with a posse of friends—has enormous potential, but that potential hasn't yet been fully explored on console. It took a year or so for GTA Online to find its feet, if Red Dead Online can do the same I will be spending an awful lot of time in sad cowboy world.

Red Dead Redemption 2 is out on PC in just a few days, on November 5.