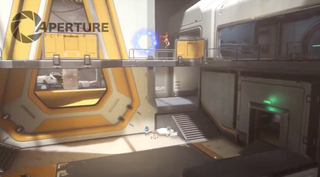 Created with Overwatch Workshop, a new, in-game modding tool, the gun isn't just cosmetic, either. Thanks to Overwatch Workshop's ability to let players change game's rules to accommodate new modes and features, the gun can be used to fire entrance and exit portals, too.

"Lymbow and myself made a working Portal gun that conserves momentum with the @PlayOverwatch workshop!" creator Andy tweeted, sharing a video of the mod in action (thanks, LadBible). Set against Portal's iconic soundtrack, it looks incredible. Here, take a peek:

If you fancy a go yourself, use the code BE2J7 to unlock the mode in the workshop.