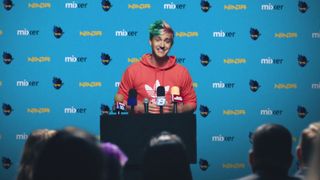 Possibly overshadowing today's release of Fortnite Season 10, Tyler 'Ninja' Blevins announced that he's leaving Twitch to stream exclusively with Mixer, effective immediately. The announcement was made via a faux press conference on Ninja's Twitter, which you can watch below.

We don't know the terms of the agreement—the length, payment, or whether Ninja will face any restrictions on Microsoft's streaming platform, but Ninja assures the fictional press conference crowd that, "It's the same me, just a different platform."

Still, it's a huge, surprising change. Ninja has arguably been the face not only of Twitch, but videogame streaming overall since his explosive rise to fame in parallel with Fortnite's. It's also an affirmation that Microsoft isn't backing down from Amazon's Twitch, despite its deeper roots as the de facto streaming platform.

According to a press release, Ninja won't just be another Mixer streamer either. He'll be attending game events throughout the year in support of Mixer, effectively working as the face of the company too.

This is a huge effort by Microsoft to capitalize on Ninja's renown. Whether it will stick remains to be seen, but I'm happy to watch two corporations clash from my couch. If you want to take sides or test the Mixer waters, you can subscribe to his channel for free for a limited time.

Assuming money was exchanged, we have to imagine Ninja didn't come cheap. He was earning $500,000 a month in March of 2018, but his Twitch subscriber base has dropped off significantly since then, according to Twitch Tracker. Even so, an exclusivity deal would likely need to guarantee his current Twitch income, which isn't tiny, over an indeterminate amount of time. Guaranteed income over the volatility a Twitch subscriber base sounds like a decent deal.

We'll likely find out more about the transition when Ninja kicks off his first Mixer stream live at Lollapalooza tomorrow.