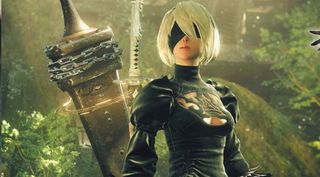 February is becoming a crazy month for fans of JRPGs. Promising (and sadly PS4-exclusive) Soulslike Ni-Oh just got a Feb release date, as did Nier: Automata, the interesting action-RPG sequel from Platinum, Square Enix, and the guy beneath that freaky moon head, Taro Yoko. Automata will be out on February 23 2017, the game's Japanese Twitter account has just revealed.

it's not clear whether the game will hit the West, and Steam, on that date, although it fits with the "early 2017" date given when Nier: Automata was announced for PC. There's a new, action-free trailer below, and when you've had enough of that, have a read of John Robertson's preview from last week.