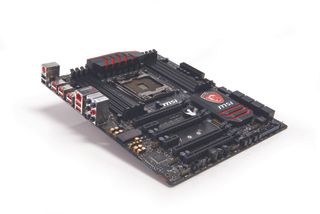 It looks like MSI is as anxious to get the ball rolling on solid state drives with the new NVMe protocol as the rest of us. They’ve recently announced a whole slew of BIOS updates for all their X99, Z97 and H97 motherboards to offer support for NVMe.

Though the BIOS updates don't detail NVMe support in their notes, you'll need to check this list to see which BIOS downloads represent the supported new SSD protocol.

Non-volatile media express is the replacement to the aging advanced host controller interface (AHCI) and has been designed from the ground up for the NAND Flash used in today’s solid state drives.

The old AHCI protocol is chock full of legacy hoops for our storage devices to jump through because it was designed for the spinning platters of traditional hard drives. That in turn means when an SSD operates via AHCI it is being held back by certain operations that have to be done, even though they might be completely irrelevant for NAND Flash memory.

So, as much as our SSDs are being slowed down by the limitations of the SATA 6Gbps interface, AHCI is also bringing them down.

For my money I would expect that’s one of the reasons we’re still seeing incredibly low scores on the 4k random read/write performance on the M.2 PCIe-based solid state drives I’ve already tested. I’m hopeful that NVMe will make our PCs seriously slick.

Taking a march on the other motherboard manufacturers out there, MSI have decided that without any actual consumer NVMe-based drives being available they’re going to update their entire motherboard range anyway.

There have been NVMe-based SSDs around in the enterprise world for a while though. Given the holy trinity of lower latencies, lower power demands and higher transfer speeds it’s not surprising that the world of the datacentre got its hands on the technology first.

We should though see consumer drives with the new protocol filtering through soon, if all the drives and compatible memory controllers sprawling around CES earlier in the month are any indication.