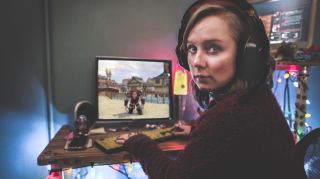 I wasn't especially impressed with the pilot episode of Mythic Quest: Raven's Banquet, the new sitcom on Apple TV about the developers of a fictional MMO (though from what I hear from people who have watched the entire season already, it gets better).

But if you enjoy Mythic Quest (or even if you don't), you should check out Dead Pixels, another MMO sitcom—though this is about the people who play the game rather than make it. The first season of Dead Pixels appeared on British network E4 in early 2019, which might make it a (small) challenge for US viewers to check it out, but whether it's through some VPN skullduggery or other methods (which can include, I should point out, just waiting for the show to legitimately appear on a US-based streaming service), it's got a lot to offer in terms of gaming humor.

Dead Pixels centers around a small group of friends who are obsessed with an MMO called Kingdom Scrolls, another World of Warcraft-ish game. I've watched the first two episodes and the series gets off to a much stronger start than Mythic Quest in large part due to having fewer (and more immediately likable) characters to focus on, along with snappier writing.

There's Meg, an office worker trying squeeze real-life dating into her demanding gaming schedule, and who invites a dim-witted but good-natured noob named Russell into the gaming clan in hopes of sleeping with him. She also starts an in-game protest that gets way out of hand when Vince Vaughn is cast in the movie version of Kingdom Scrolls (she suggests mailing him poo in a sleeping bag).

Nicky is a stereotypical gate-keeping nerd who still managers to display moments of self-awareness of how little enjoyment the game actually brings him after two solid years of playing it ("I'll level up, and there will be a little red banner on the screen, and a 'tinging' sound, and it'll trigger a tiny dopamine rush in the mesolimbic pathway of my frontal lobe, and for that second I will momentarily forget about death.") And there's Usman, an American dad who is constantly neglecting his off-screen kids and wife so he can play (he yells instructions to his small child about how to open the safety cap of a medicine bottle because he doesn't want to put down his controller).

Some of the show takes place inside the game, with the characters speaking to each other through their avatars, which is well-animated and fun (Russell arrives in-game as a towering green woman in a thong, exclaiming "I'm a massive woman! I'm basically the biggest possible woman!")

I really enjoyed the first two episodes of Dead Pixels. While it does include some pretty broad gamer stereotypes, the writing feels more informed by actual gaming experience than some of the jokes in the Mythic Quest pilot, which just felt like they were based on the standard pop-culture assumptions of gamer nerds (if that makes sense).

Give it a watch if you can. The first season of Dead Pixels did well in the UK and was picked up for a second season in July, so hopefully we'll see more of it soon (and hopefully it'll come to US-based streaming services in the future, too).