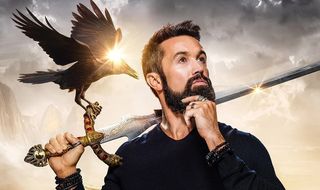 Note: This is a recap and a review, so there are spoilers for the first episode of Mythic Quest: Raven's Banquet contained below.

After a few seasons of character development, looking back at the pilot episode of a 30-minute sitcom can often feel like watching an entirely different show. Parks & Rec, Community, 30 Rock, The (American) Office, and plenty of other shows took a while to find their stride, and their pilots presented the cast as caricatures rather than real characters.

If Mythic Quest: Raven's Banquet (now streaming on Apple TV) runs for a few seasons, this may be one of those pilots. It rushes to cram in as many characters as it can and slap hurried, one-dimensional personalities on them, painting them in the biggest and broadest strokes possible. While the pilot isn't particularly funny and leans too hard on obvious gaming stereotypes, you can at least see an inkling of potential here and there.

Ian Grimm, played by Rob McElhenney (also one of the show's creators), is the creative director of the world's biggest World of Warcraft-like MMO, Mythic Quest, which is facing the deadline to ship its first major expansion, Raven's Banquet. The pilot begins with the team behind Mythic Quest watching an ad for Raven's Banquet, which ends with the camera spinning around Grimm's face, with GRIMM written in all caps over it, while a voice-over compares him to Steven Spielberg and George Lucas.

But there's a wrench in the works threatening to delay Raven's Banquet's launch. Poppy wants to add a new item to the expansion at the zero hour: a shovel, so players can deform the game world's terrain—though to Poppy it's also an opportunity to put something into the game that is 100% hers, since Grimm's oppressive micromanagement has never really let her express her own ideas.

Meanwhile, Brad Bakshi (Danny Pudi) is the head of monetization, so naturally he only cares about how many people will buy the shovel. He sides with Grimm, who thinks the shovel is too boring an item as-is, and decides it'll never sell without some tweaking.

Adding another obstacle is the aging 1973 Nebula Award-winning writer CW Longbottom (F. Murray Abraham) who thinks the shovel needs a backstory, because, you know, he's a writer and thus prone to over-dramatization. "Who birthed this mysterious terra-spade?" Longbottom asks. "The gods themselves? Did they suckle at the bosom of Hera like babes at their mother's teat?"

Poppy wants to leak the basic shovel to Polygon, thinking that if players know about it in advance, Grimm will be forced to include it to the expansion. But Brad suggests instead leaking it to streamer Pootie Shoe (sigh), a 14-year-old mega-famous gaming celebrity who yells profanity at his off-screen Mom, hawks products like 'Rager Body Mist', and calls his LGBTQ followers 'pootie-fruities."

"I hate Pootie Shoe," says Poppy. "Yeah, he's a real piece of shit," agrees Brad, but if Poppy wants to get her shovel out there, she should leak it to a streamer, not the games media. Point taken!

Things get more dire for Poppy and the launch deadline as Grimm decides the shovel needs to also be a weapon, donning motion-capture gear and smashing watermelons as if they're human heads with a real shovel. Pootie, meanwhile, winds up hating the shovel, which was Brad's real plan—let people see how boring the shovel is so Grimm has to both include it in the expansion and sex it up. Longbottom and Brad quickly envision the shovel as part of a loot box that looks like a topless nymph. When players buy the shovel they'll be able to see the nymph's boobs. I can't really disagree that this would probably sell more shovels.

There are plenty of gamer in-jokes in Mythic Quest: a knight takes a dive into a pile of leaves as an eagle screeches, a nod to Assassin's Creed, and the shovel is discussed in terms of TTP—Time-To-Penis—the time it will take before players start using shovel to carve giant dongs into the landscape. And I have to imagine many long discussions at real game studios have taken place over players carving penises into everything.

A few characters aren't given much time in the extremely busy pilot—David Brittlesbee, an indecisive executive producer, Brittlesbee's new assistant, who immediately demonstrates a slavish devotion to Grimm, and two QA testers, one of whom has a secret and at the same time completely obvious sitcom-style crush on another. There's also an exasperated human resources manager whom everyone treats like a personal therapist. None of them do much but appear occasionally to reinforce their one-note personalities: the anxious one, the ambitious one, the awkward one, the annoyed one, and so on.

As the expansion faces a delay over the competing shovel concepts, Poppy and Grimm eventually have a heart-to-heart: Poppy explains that she just feels like the brush Grimm uses to paint his masterpiece, but Grimm drops his self-centered shell just long enough to explain she's not just the brush, she's also the artist, and he needs her because he can't express his vision all by himself. The scene wisely steers clear of becoming overly sentimental, just giving a brief hint that there's more to these characters than their pilot can afford to get into.

It's a season-long arc crammed into the first 30 minutes, in other words, but that's what TV pilots typically have to be. With a little more breathing room, some time for the writing to slow down and the characters to loosen up (and less reliance on obvious, low-hanging gaming stereotypes) I think Mythic Quest could find its footing. It has a talented and diverse cast with good energy. It just needs time for them to find a bit of chemistry instead of simply launching quips back and forth at a breakneck pace.

The Raven's Banquet expansion is released on time, and the team gathers to watch Pootie Shoe give it four 'b-holes', apparently his highest rating, while Brad runs up to quickly cement the happy ending: Reddit, Steam, and Kotaku all love it (because somehow everyone managed to play an entire major expansion to an MMO the same day it was released). Most importantly (to Brad), the shovels are selling like crazy! And apparently gamers aren't absolutely furious about having to buy a digital shovel that has a single animation when you smash someone's head with it!