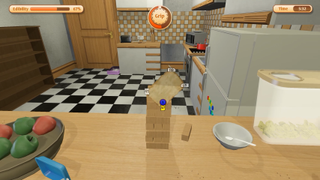 Bossa Studios' follow-up to Surgeon Simulator, I am Bread, might be even more frustrating than Surgeon Simulator. I am a piece of bread, and movement is similar to Octodad, except I have no limbs, so I'm just flopping around by latching onto surfaces by my corners. The goal is to become covered in good stuff—butter, jam—while avoiding edibility-reducing surfaces such as the floor. Eventually, I must become toast.

Being bread sucks. It's painfully challenging to get used to the controls, as you'll see in the video I recorded. And that's the point, of course—it doesn't mean I don't like it. I put over seven hours into Surgeon Simulator, because once I accepted how ruthlessly my patience would be tested, I made a sort of game of that. How long can I go before I crack?

The bread animation is great, and there are actually more decisions to make than "should I throw my controller against the wall now or later." There's a lot of freedom, really—multiple paths and many techniques to discover. Flopping end over end can be the most efficient way to travel, but can be worryingly fast. Spinning my floury body around to leap over gaps is especially fun (when I hit my landing, at least.) I might be looking forward to watching other people play more than playing myself, as I'm sure the speed runs will be fantastic.

I'm most disappointed that I am Bread doesn't feel as funny to me as Surgeon Simulator, at least not yet. It's absurd and silly, but the antics of a slice of bread just don't get me quite like awkwardly shushing a sleeping patient and then dropping one of their lungs on the floor. It actually has strangely sad undertones, and that could turn out interesting later on. I didn't expect to be curious about the plot of a game starring a slice of bread, but hey, I kind of am.

I am Bread is on Early Access now, so it's not quite complete, but the developer plans to release it within a few months. There are more levels and bonuses coming, they say, as well as leaderboards, achievements, and the expected bug fixes. The only thing I noticed on the latter front were some issues with the menu. It could also use remappable controls—I found the mouse and keyboard controls unusable as they were, though that may just be the nature of the game.

The best way to tell if I am Bread is for you is probably to watch someone else struggle with it, and decide "Do I want clutch my forehead as if my car just broke down on the way to the airport, causing me to miss a funeral?" That's kind of the feeling I got, but there are good times, too. The video above should give you an idea.