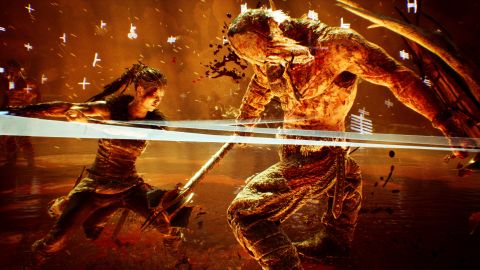 Hellblade could benefit from more exploration and enemy variety, but it's a powerful portrait of the strength of will over personal demons.

Senua, Celtic warrior extraordinaire, her face and arms slathered in cerulean woad matching the color of her eyes, slices through the hordes of the Viking undead with the severed head of her dead boyfriend strapped to her belt. In some ways, Hellblade: Senua's Sacrifice comes off a little like a gritty reboot of Lollipop Chainsaw.

But there are few laughs in this gloomy world and certainly no lollipops. Hellblade is serious business—so serious, in fact, that behind all its Viking swagger and Celtic rage it aims to let us peep into the mind of someone with symptoms of psychosis, which in this case range from hearing voices to a near-total disconnect from reality. Games often mishandle this sort of thing, but Ninja Theory eagerly proves it did its homework with a documentary on the title screen detailing how the studio chatted with Cambridge professors and psychosis patients in the hopes of letting players understand psychosis through the interactivity games offer.

And wonder of wonders, it generally works. More than that, it works with a title like 'Hellblade', which conjures images of a Kratos-like hero stomping into hell to kick ass (and there's certainly some of that). But most of all, it works because of Senua herself, and the challenge of the situation she finds herself in. Ninja Theory uses haunted eyes to full effect in long, moody closeups peppering the narrative. She peers not only into the darkness, but seemingly past the camera, past the screen. Looking back, I found depths of despair and anger there that were sometimes hard to meet head on.

All this makes Hellblade more of a psychological portrait than anything else, and as such, the story itself isn't all that complicated. Following a Viking attack on her home in the Orkney Islands that left her lover Dillion dead, Senua descends into the Norse underworld of Helheim to reclaim Dillion's soul from Hela herself. So far, so 2010's Dante's Inferno. But this is a hard battle for Senua, emphasized brilliantly with her slow tread, reluctant jog, and hurried breathing. Here we find a girl who was kept out of sight as a child by her father, and whom the villagers blamed for bringing the Vikings upon them. Some people would crumble under such pain. But still Senua fights. It's a little inspiring.

It's a shame that inspiration doesn't carry over to the actual fights—not initially, anyway. Senua's animations are impressive, but her bloody business never grows more complicated than delivering light and heavy attacks while blocking, evading, and parrying. I frankly found it kind of dull in the one-on-one duels at the start, and it didn't help that the enemies sometimes seem to skip a few animations when reacting to attacks. Nor does it help that there's precious little variation in the foes themselves, who almost always show up as tall, shirtless warriors with deer-skull helmets or as beefy berserker shamans. By the end of the first hour, you've basically seen every non-boss you're going to see.

Much of the combat's shortcomings slink away once ever-larger bands of the deer-helm gang crowd the scene, forcing Senua to take on around seven at once, culminating in a final sequence where she leaps around the floor hacking and slashing like a bladed pinball knocked about by bumpers. If she parries enough, she can 'focus' by pressing 'E' or squeezing a gamepad's right trigger to slow down time to slice her enemies with comparative ease. Then the drums thunder. A chorus of warriors chants. In Hellblade's most triumphant moment, the music even bursts into an EDM song that somehow doesn't feel out of place. In these frantic moments combat in Hellblade becomes a thing of beauty—a dance that recalls the kinetic artistry Ninja Theory achieved in 2013's DmC.

The fluidity of this dance suffers a bit from the awkward need to lock onto different enemies solely by looking at them. There's no manual way to do so. Sometimes I'd need to prepare to parry the berserker charging me, but couldn't easily switch the target from the shielded warrior I'd be whittling down, leaving me no real option but to dodge the berserker. It's the sole real flaw of Hellblade's nonexistent user interface, which otherwise allows the force of Senua's raw emotions to filter through the screen unblemished by numbers or meters. The only element that comes close a UI is the way a magic mirror on her belt lights up when it's time to trigger her combat focus attack. It lends intensity to boss fights, as you're never really sure when they'll end.

The trouble is that mistakes mean something here. Senua doesn't have many opportunities to screw up. Hela infected her arm with rot, and the tendrils of decay creep further up her limb with each death. And when they reach her head? Game Over. Progress erased. It's a possibly contentious element that helps make Senua's plight relatable. When she hesitates, I hesitate. When she's scared, I'm wary. I have something at stake, too, however minor.

The approach explains the relatively short eight or nine-hour running time. It's not as harsh as it could be. I died maybe six times in my playthrough, and by the end the rot had only snaked up around three-quarters of her arm. Good thing, too.  Sometimes I failed for the dumbest reasons, as in a sequence when, in panic, I neglected to pick up a torch that would have chased off a beast hunting me in the darkness. I let my fear overpower my logic. Senua wouldn't have done that.

Is Helheim real? It's never entirely clear—a consequence of Senua's psychosis. But it certainly feels like it, and it hammers home why Vikings were so eager to die in battle and hang out with the bros in Valhalla rather than dying of old age. Having the gall to do that, it turns out, lands you a prime spot as a charred arm grabbing at passersby among millions of others.

Senua learns about all this Viking stuff from an Irish scholar and former Viking slave named Druth, hinting that his tales might have helped shape the vision of hell she travels through. She recalls Druth's lessons as she encounters runestones along the way, which trigger Druth's optional but wonderfully acted narrations of the 'greatest hits' of Viking lore.

Druth stands out because he's a voice Senua can choose to hear. She can't turn off the constant voices of the women in her head, who mock her, argue with each other, and advise her even to the point of drowning out Druth's lessons. They're the little nags of anxiety, fear, and doubt we all know, but Senua hears them as real voices, a gossipy clique chattering about her life as though it were a new episode of Game of Thrones.

"Can you see that?" they whisper as Senua sails by men impaled on stakes. "They're going to do that to you."

They sound close, a whisper away. As visually stunning as Hellblade is, its true triumph is sound. Strap on some headphones, and the voices of the women and a gruff dude who sounds like the Mouth of Sauron swirl around you in 3D binaural audio, warning Senua to 'watch out' when an enemy attacks from behind or telling her when to 'focus'. Focusing is Senua's way of imposing her will on her world, and it's used extensively, not only in combat but in sequences where she has to listen for the precise direction of the chanting of an evasive boss, or feel her way through the pitch blackness of a lair where frightful blobbing enemies lurk.

Hellblade, in fact, is just as much about solving puzzles with focus as murdering Nordic hellspawn, with many of them involving finding the shapes of Viking runes in the chance alignment of random objects or standing at the proper spots to dispel illusions. These are my favorite parts of the game, being neither too hard or too easy. Even better, Hellblade never lets these elements grow stale. Sometimes, to take an example, it will throw a curveball and make you discover the runes while running from an unbeatable flaming monstrosity that stalks Senua, Balrog-style, through a ruined mead hall. The problem? There's little room for exploration. Hellblade isn't exactly a Final Fantasy XIII-style corridor, but neither is it far off.

"She needs to remember the way back," the voices say at one point. C'mon, it's not like it's that hard.

Perhaps, of course, they weren't talking about the mini-maze. As Dillion himself tells Senua in happier times, "The hardest battles are fought in the mind, not with the sword." Senua, though, fights both types of battles at once. She fights them to return to the only sense of happiness she knew. Other games have focused on such themes, sure, but few have delivered the truth of that message with such conviction.

Hellblade could benefit from more exploration and enemy variety, but it's a powerful portrait of the strength of will over personal demons.