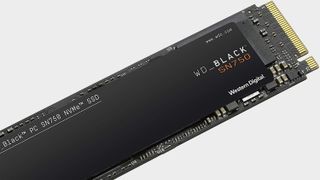 If you need of a new SSD for your PC, or if you're in the middle of buying parts for a new rig, this sale might interest you. Right now, Western Digital's SN750 500GB NVMe SSD is just $69.99 on Amazon. That's a discount of around $10 from the usual cost, and $2 below the Black Friday price.

This is an NVMe drive, so it offers substantially better performance than SATA-based drives. We tested this SSD at near the beginning of this year and discovered it's faster than Samsung's 970 Evo and effectively tied with the 970 Evo Plus. The WD Black SN750 has a read/write speed of 3,470/2,600 MB/s, while the Samsung 970 Evo Plus has a read/write speed of 3,500/3,200 MB/s.

This Western Digital SSD does have a slower write speed, but if you're only worried about loading games as fast as possible, you're getting the same blazing speeds for about $30 less. For instance, it can take "between 30 and 45 seconds to pick up from where you left off after selecting "Continue" on the main screen" in Assassin's Creed Odyssey. But in our testing, we discovered that number dropped to 26-27 seconds. Not too shabby.

If you're looking for deals on other SSDs, have a look at our best SSD deals roundup. There's plenty of SATA options, if you want to upgrade an older PC that doesn't have an NVMe slot.