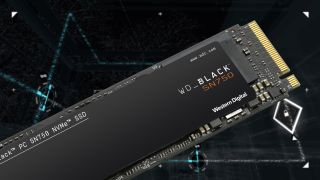 Games these days take up a hell of a lot of space—we're talking at least around 50GB of storage for your average everyday triple-A blockbuster title. And while high-capacity hard drives and the best SSDs for gaming are both getting cheaper, the demand for faster storage remains.

Hardware makers know we want more than the capacity to store a healthy portion of our Steam collections on a single drive. It's also important we reduce, if not eliminate completely, the dreaded load screen wait times that often hinder otherwise breathtaking interactive experiences. In last year's Assassin's Creed Odyssey, for example, it can take between 30 and 45 seconds to pick up from where you left off after selecting "Continue" on the main screen.

Western Digital hopes to mitigate some of that downtime with a new M.2 SSD branded for gaming, aggressively priced at $250 per 1TB, or 25 cents per gig. Alternatively, you can buy it in 250GB and 500GB flavors for $80 and $130, respectively. To differentiate it from the WD Black PCIe SSD that came before it, it's called the WD Black SN750. Given its naming convention, I wouldn't be shocked if it spawned a few sequels down the road.

It's a drive that deserves attention. Adhering to the NVme specification, it comes as no surprise that the WD Black SN750 is a bit of a speed demon on paper: Western Digital claims it can transfer data at up to 3,470MB/s which, yes, is just short of 3.5GB per second.

Although its promotional materials are a little too on the nose with the whole Watch Dogs hacker font aesthetic, I will admit I felt a lot like Aiden Pearce when I installed the drive in my motherboard's M.2 slot. I was feeling angry and vengeful, but slow to express my emotions in any meaningful way, because I'd lost that blasted tiny screw that secures the M.2 SSD into its designated standoff. About an hour later, I finally recovered the screw from behind my MSI Z370 Krait Gaming motherboard, fastened the drive and started testing.

One key improvement Western Digital made to the WD Black SN750, coming from the PCIe predecessor, is the integration of the company's new SSD Dashboard software. In it you can check the status of the drive, including its temperature, free versus occupied storage space and the number of writes it can perform before its eventual demise. You can also keep tabs on its performance, using the aptly named Performance tab to monitor its current and maximum transfer values. A Tools section lets you wipe the drive or create a bootable USB.

But perhaps the most intriguing part of Western Digital's SSD for gamers is Gaming Mode. Now, for the sake of transparency, the company stressed to me in an interview that Gaming Mode is meant for the forthcoming heatsink edition of the SN750. It's supposed to turn off the power save modes that sometimes undermine the myriad benefits you expect from using an SSD over a traditional spinning hard drive.

Unfortunately, in my own synthetic testing, enabling Gaming Mode didn't seem to make a difference. In fact, it made things slightly worse. Prior to activating the feature in CrystalDiskMark 6, the WD Black SN750 garnered a sequential read speed of 3,419MB/s and a write speed of 2,992MB/s. Meanwhile, running the benchmark again with Gaming Mode turned on saw a diminishing return of 3,412MB/s read and 2,992MB/s write (basically margin of error). Either way, those aren't rookie numbers, and a stress tester like CrystalDiskMark isn't the best way to measure a power save deterrent like Gaming Mode anyway.

Instead, you're better off assessing its capabilities organically, in the context of an actual game. In my own experience, with the WD Black SN750 installed, the initial load screen in Assassin's Creed: Odyssey took my PC 26 seconds with Gaming Mode on and 27 seconds with it off. Not too shabby considering the typical 30-45 second range I mentioned earlier. Whether or not a heatsink puts a dent in those results remains to be seen. Still, even as it stands right now, the WD Black SN750 is a competitively priced and specced NVMe drive, one whose prospects will hopefully improve by the time the heatsink model arrives later this spring.

How does the WD Black SN750 compare to the best NVMe SSDs, like Samsung's 970 Evo and the new 970 Evo Plus? It ends up being faster than the former and effectively tied with the newer drive, and Samsung is often the gold standard among SSDs. In short, the SN750 is a performance monster, with aggressive pricing as well. If you're willing to pay the premium to get a faster gumstick drive rather than going with a higher capacity SATA model, it's definitely worth a look.