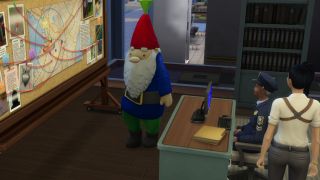 I'd like to make it clear I created a new character and named him Spurlock Gnomes before I even knew there was an actual gnome costume in The Sims 4.

I was interested in my Sim becoming a detective (hence the Sherlock Holmes pun) in The Sims 4 Get To Work Pack, which I bought in the Sims 4 sale. But I forgot I also bought the Sims 4 Seasons Pack at some point in the past, which contains a gnome costume (also a bunny costume and a few others).

It seems like a happy coincidence and I like the idea of wearing a gnome costume as I climb the ladder in the local police department. Plus, I can now pretend I'm in the Watchmen extended universe where cops have to hide their identities. But this gnome costume would in fact prove to be my downfall, along with the fact that I own a bunch of other Sims expansions and packs and have no idea what they contain or how they work. Let the tragic tale of Spurlock Gnomes be a warning.

I begin my career as a gnome cop by applying for a job at the police department online and immediately heading to a crime scene after collecting my first case file. The first thing I notice with my gnome detective's shrewd instincts is that I have no idea what actual crime has taken place here. There are footprints to photograph and samples to take and witnesses to interview, but the only thing I can really determine is that the refrigerator has possibly, maybe, been set on fire at some point.

I also notice that, despite being a crime scene, this house is being treated as yet another place for Sims to chit-chat about compact discs, cars, cupcakes, and movies. Cops and witnesses stroll directly through evidence on the floor, use the bathroom, and sit on beds and sofas and chat with each other. This feels less like a gritty crime scene and more like a typical Sims house party. Gnome Cop is appalled by the careless nature of this investigation. Fridge burning (or whatever happened here) is no joke! I need to clean up this department.

After taking evidence to the precinct I analyze it and add it to the big crime map bulletin board (complete with photos and red strings) which will eventually narrow down the possible suspects. I can also fingerprint other criminals, frisk them, and take their mug shots, which is fun only because I'm in a giant gnome costume that no one seems to have any questions about. I can also go on patrol in random neighborhoods, looking for people to give citations to, like these two women who choose to have a sudden fistfight in front of an enormous police gnome. Ya busted!

So far, being a detective is as bright and cheery an affair as anything else in The Sims 4, but if I want gritty, I can definitely get it at home. I was surprised, again, to find that my gnome cop doesn't have to live in the suburbs. Thanks to the City Living Pack, which I bought at some point but completely forgot about, I can really get into my role as a beleaguered detective by living in a cramped, dingy apartment instead of a pleasant suburban house.

After buying some furniture, I quickly discover (again, this was a surprise) that my crappy apartment was far crappier than I expected. Mice routinely emerge from holes in the walls. The power goes out randomly. Roaches scurry around in the kitchen. I have to get up in the middle of the night to bang on my neighbor's door because they're playing music too loudly. This is the last thing a gnome needs when he's trying to prove he's a good cop. I wanted gritty, but I can't even get a good night's sleep with all the interruptions and angry calls I make to my landlord to kill mice and fix the fuse box.

And it gets worse when a flippin' vampire named Vlad sneaks into my apartment in the middle of the night. Oh, right, I own the Vampire Pack, too, which I also know nothing about. Vampires can apparently just walk into your house, hypnotize you, and drink from your neck? News to me. Worst of all, Vlad has seen me out of my gnome costume! Now someone knows the mysterious gnome cop is a guy who looks exactly like a gnome!

I'm annoyed by all these expansions forcing their way into my detective story, but I try to roll with it. I wanted to be a cop, and a cop needs a nemesis and an off-the-books case to chase in his downtime even if the police chief (a young adult who keeps trying to flirt with me) tells me to stay away from it. Tracking down and dispensing with this undead ghoul will give Spurlock a little extra motivation.

I finally arrest a culprit in the fridge fire case, then take a well-deserved vacation (I've worked for two whole days in a row), traveling to the vampire neighborhood and inviting myself into Vlad's home, where I attempt to kill him by... well, there's not a lot of easy ways to kill a Sim in their own house, so I start fires in Vlad's three fireplaces and cook a complicated meal, hoping to burn the place down with my lack of cooking skills. Both methods fail but at least I have a nice turkey dinner. I chat with Vlad a bit so he'll be added to my contact list, return home, order some garlic over the internet, invite him over, and try to garlic him to death.

While Vlad occasionally complains about the half-dozen cloves of garlic I've casually placed on the table in front of him, he doesn't die writhing in agony as I'd hoped. I wall off the living room doorway hoping he'll be trapped forever and expire, but he teleports in a puff of smoke (another surprise!) into my kitchen, and then vanishes completely. Damned fiend! You may have won this round, you undead ghoul, but Gnome Cop isn't finished with you. I order some vampire lore books and start studying. If there is a way to kill Vlad, the rookie gnome cop who cracked The Case of the Fridge Fire Or Something is the perfect person to uncover it.

I return to work, investigating another crime scene—this time a house has been tagged with graffiti that looks like pictures of elves. I collect evidence and take pictures as the other officers relax and chat, and then build up a suspect profile and finally send out an APB for my suspect: a blonde man wearing a coat. It's not a lot to go on.

I head out to question the locals. It's summer now, thanks to the Seasons Pack, and I keep getting warnings that my gnome cop is getting very hot inside his bulky gnome costume. I ignore the warnings—if I can deal with the discomfort of a roach-filled apartment and vampire-related neck injuries, a little heat isn't going to kill me.

Then a little heat kills me.

I had no idea you could overheat to death. Once again, a Sims 4 Pack does something I didn't know it could do because I keep buying and installing them without reading their descriptions.

And just like that, the promising career of Gnome Cop is over. As if to rub it in, I'm given a commendation for a good day's work even as I lie there unconscious with the Grim Reaper ready to harvest my soul. A couple bystanders weep over the presumably sweat-soaked and stinky body of Spurlock Gnomes, but the Reaper is unmoved and Spurlock is not spared from the eternal void.

Well, this sucks. I hate leaving unfinished business: the case of the cute elf graffiti remains unsolved, my vampire nemesis is still at large, and I never got to go on a date with the chief of police.

Someone will need to step in and pick up where Spurlock Gnomes left off. I quickly create another costumed detective, Bearcule Poirot (using a bear costume from another expansion pack I forgot I owned), vowing to kill that vampire, arrest that grafitti artist, and have sex with that boss.

Though I think I'll probably wait until Autumn to do it.