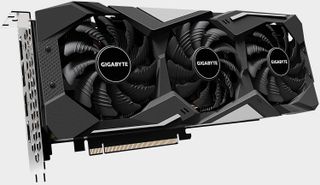 The Radeon RX 5700 XT is currently AMD's most powerful graphics card, and if you've been waiting to upgrade your PC (or you're in the middle of pricing out a new build), one version of the card from Gigabyte is down to just $379.99 from Newegg. That makes it one of the cheapest RX 5700 XT cards available right now.

Enhanced cooling is the main selling point of this card: you get three 80mm fans, a significant upgrade to the single blower fan on the reference design RX 5700 XT. There's also an RGB-lit logo on the side, and all the card's settings are configurable through GIgabyte's 'Aorus' desktop software.