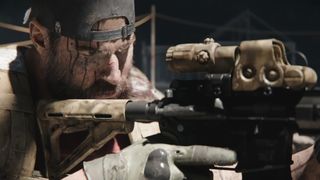 Ghost Recon: Breakpoint's 1.1.0 update, originally due out on December 18, has been delayed until January, leaving its community antsy for improvements. The survival shooter, which got 40/100 in our review has received a few updates since launch, but players are eager for the awaited overhaul.

"In our December Update we announced that we would have our next TU, 1.1.0, live on the 18th," the announcement reads. "After careful consideration by the development team, we are choosing to delay the release of the TU until the latter half of January to ensure its quality.

"Our goal is to deliver you polished content and meaningful bug fixes, to do that we need a little more time. This means that the Terminator Live Event and the fixes referenced in the monthly update will be coming to you in the new year."

Ubisoft hasn't had a great year. Far Cry: New Dawn, The Division 2 and, especially, Ghost Recon: Breakpoint all performed poorly, sending the publisher a pretty clear message: the formula isn't working anymore. A trio of games have been delayed as a result, while Ubisoft promised a major overhaul of the latest open-world outing.

"One of the key elements of our vision for Ghost Recon is to immerse our fans in a gritty and authentic military experience," the Breakpoint team said in October. "In line with this vision and the feedback we received, we are working on a more radical and immersive version of Ghost Recon Breakpoint. We also want to let you tailor your experience to the way you want to enjoy the game, since freedom of choice has always been part of the Ghost Recon DNA."

So far, the updates have focused on bug fixes and introducing planned stuff like the Project Titan raid. The 1.1.0 update will have more fixes, as well as introducing the Terminator event, where players will need to stop a T-800 from murdering everyone. There have also been some tweaks to cover, stamina and other systems, with more expected in the next update.

The delay announcement is closed in the official forums, but on Reddit players haven't taken the news well. The source of their frustration isn't the delay itself, but rather the cadence of updates, and there's a lot of general despair about the state the game is in and the likelihood of the update making much headway.

Like fellow live service games Anthem and Fallout 76, it's going to be an uphill struggle, and it's going to take a lot longer than a few months to see the results.