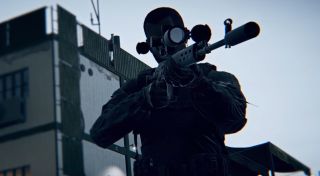 It turns out the answer isn't terribly obvious, but you're going to need a little help from the dead or unconscious bodies of your enemies.

First up: know your door colors. Doors lit with blue light are unlocked and free to pass through. Will you go in or out? The choice is yours.

Doors with tiny screens that say 'Locked' won't let you through. You'll need the proper clearance to open Breakpoint's locked doors, but since this is the grimdark militaristic Ghost Recon, these doors only open to specific biometric signatures, meaning you'll need some skin to get through.

To open these locked doors, you'll need to take a nearby enemy hostage by sneaking up on them or knocking out their legs with a bullet or two. Put them in a tight chokehold, drag them over to the door, and the scanner will recognize the soldier's biometric signature and open wide. If you're more aggressive, dead bodies work just fine too. Take an enemy out and drag their corpse to the door. They're now a tragic, hard-bodied key.

Be warned, door-unlockers: Some locked doors are lit in red and do not feature a scanner. These red doors are impossible to unlock. They're sent from hell to torture you. Woe is the door without a key, a portal through which only sorrow may enter. Begone, ye whom may attempt passage, for there is naught but the void beyond. Tis but a videogame, after all. Or is it? (It is.)

What's it all for? You'll typically get some ammo, a helpful item, or a new weapon behind every locked door. Ghost Recon Breakpoint's map is huge, though, so it's possible that even more valuable, unique rewards are hidden somewhere in Auroa. Stay vigilant and poke around every enemy stronghold to find locked doors—they're all over the darn place. A timely ammo top-off or shiny new weapon could be the difference between a successful operation and a botched one.