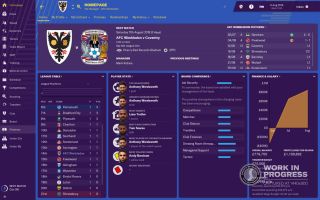 The Football Manager blog has started hinting at new features in Football Manager 2019. The latest iteration has secured the official Bundesliga license, which means logos, kits and player likenesses from all 36 teams in the German leagues will be present.

In addition to freshening up the interface a little, FM19 will overhaul the training system to include "new and bespoke sessions and schedules" when preparing for fixtures. New team instruction options will supposedly allow you to craft your own footballing philosophy to "reflect the most popular tactical innovations in modern football."

VAR—video assistant referees—will also feature in games, along with goal line technology. You can also expect agent feedback during transfer negotiations, better briefings before matches and a fresh interactive tutorial to guide new players in.

Football Manager 2019 is due out on November 2. To tide you over, enjoy this footage of a tiny referee pretending to check a video screen to award a penalty decision.