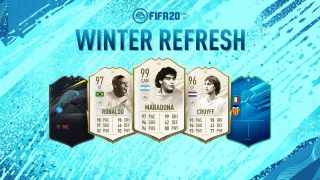 FIFA 20 Winter Upgrades is back to celebrate the most improved footballers plying their trade across the world, and reflect their success in FIFA Ultimate Team. For the top stars who have exceeded expectation in terms of the goals they've stuck away or the clean sheets they've grabbed, expect to see their stats boosted very soon.

Thanks to EA on Twitter, we already know all the players who will be getting a well-earned refresh. So, without further ado, let's dig into when we can expect the new cards to go live in the game and which names have been recognised in the following FIFA 20 upgrades breakdown.

When is the FIFA 20 upgrades date?

Unlike most of the other promos we get, we already know the players who'll be getting a seasonal boost—more on that below. However, the time is the same as ever: 6pm GMT (7pm CEST, 1pm ET, 10am PT). You don't need to wait long to start grinding again, either, as the FIFA 20 Winter Upgrades date is February 14, 2020. Otherwise known as... today.

Usually the upgraded cards are released in batches based on the league the player's in over the next ten days: the top five European leagues typically go individually before the rest of the world.

On Twitter, EA notes that only the top 50 players who've made the biggest improvement (+3 OVR or higher) will be getting a stat boost. That said, there are also new players coming into the Winter Fresh fold, and over 100 cards will get upgrades to their Weak Foot and Skill Moves. Anyway, here's the top 50:

While there's plenty to dig through, let's reflect on a few highlights. In the Premier League it's hardly a shock to see Jamie Vardy in there; a hit favourite for the golden boot, the Leicester striker is set to see his measly 82 overall get a much-needed increase. The lightning-fast Adama Traore is also a solid pick, given that he's developed the end product to match his blistering pace.

The most upgraded players can be found in Spain's La Liga with 15, including Real Sociedad boy wonder, Martin Odegaard. Speaking of young improving talents, Erling Braut Haaland moves through the FUT gears since the 19-year-old started scoring for fun at Borussia Dortmund.

We're getting Icon Moments, but there's no sign of Icon SBCs

Not only are we getting the Winter Refresh today, but Icon Moments are confirmed, too. However, despite plenty of fan's wanting to see them, it doesn't look like Icon SBCs are returning any time soon. Either way, these are the incoming Icon Moments: