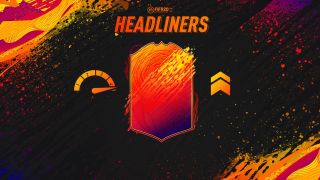 Who's in the FIFA 20 Headliners team 2? FIFA Headliners is back once again to select the excellent players that have shown consistently strong form throughout the season. Each one has a great chance to strike fear into strikers and even the toughest defensive units, so FUT players all over the world will praying to the EA gods that they can add as many of them as possible as they seek to round out their ideal squad.

Like the FIFA 20 Future Stars, these special cards will be an asset to any team, whether they're a man mountain between the sticks or blisteringly quick forward, and they work differently to your average Team of the Week XI. So, here's what these cards are and what they do, and who made it into team 2 just in case you're new to all this Ultimate Team business.

What are FIFA 20 Headliners?

Unlike your standard Team of the Week starlet, FIFA Headliners recognise players who haven't just performed well, but consistently strongly throughout the season. Also players are excluded if they have a base item rated above 90, have appeared as dynamic cards such as a One to Watch, Team of the Year, or Road to the Final, and must have at least one in-form this season.

What's more, these 'live' cards are updated throughout the season if the player bags another in-form and you can expect them to be at least one overall higher than their most-recent in-form.

Team 2 was announced  at Friday, January 24 at 6pm GMT. And of course there's room for yet another Liverpool player. Reus, Sterling, and Silva also make the second cut.

We've all waited patiently, and above and below you can see the full FIFA Headliners list. If you paid attention at all to my set of predictions before the real list came out, I got a few of them right. But mostly I got them wrong. Oh well, maybe some will appear in the next one.