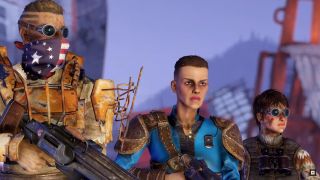 In addition to discussions about the new map coming to Fallout 76 Nuclear Winter and the fact that private servers will be added to Fallout 76 "sooner than you think," we learned more about Fallout 76 Wastelanders at QuakeCon. Wastelanders is the fall update that will add human NPCs and factions to Fallout 76, and bring branching dialogue to the game for the first time.

Player attributes will help determine what sort of dialogue options are available, and a player's level of perception, charisma, and other stats will result in different dialogue choices while talking to NPCs. Wastelanders will add a reputation system to Fallout 76, and your standing with the factions will also come into play in determining what dialogue choices are available.

"Also, remember this isn't the Fallout 4 dialogue system, said project lead Jeff Gardiner during the Fallout 76 panel discussion. "This is more like Fallout 3, where you have a list of stuff..."

Here, Gardiner paused and laughed due to the sudden burst of applause from the audience—who clearly prefer Fallout 3 to Fallout 4. "So you'll have a list of things, and you're not just limited to those generic options," Gardiner finished.

We also learned that in addition to the two rival factions of the settlers and the raiders, there will be sub-factions in Wastelanders. We didn't hear much about the sub-factions, except that one include a cult of Mothman worshippers. I'm definitely interested in meeting them.

Wastelanders will also bring along new weapons, including a series of new Gauss rifles, more plasma weapons, and bows and arrows (with associated perks)—including arrows that players can strap dynamite to. New enemies will include Floaters, which were hovering creatures from Fallout 1 and 2 who never made it into later Fallout games. Wastelanders is currently targeted for November.