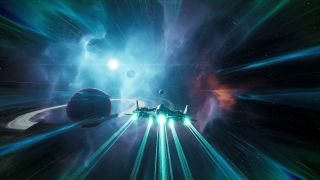 Everspace 2 developer Rockfish Games is emphatically not a big fan of Epic Games Store exclusivity, taking the opportunity to drag developers and publishers over "broken promises" in a Kickstarter update. Not surprisingly, Everspace 2 won't be an Epic exclusive—it's launching on Steam first.

Due out next year, Everspace 2 will be released on GOG, the Epic Games Store and Steam, but it looks like it will appear on the latter before it hits other platforms, initially via Steam Early Access.

Rockfish reckons that Epic exclusives have eroded trust in developers, claiming it's at an "all-time low" because some developers have made a timed deal after doing a Kickstarter. With its Kickstarter, however, Rockfish says it's doubling down on its promise to launch on Steam first, no matter what.

It's still technically a timed exclusive, then, just not on the Epic Games Store. Steam is the developer's most important store, though backers will still be able to choose between a Steam, GOG or Epic Games Store key before the full release.

The Kickstarter launched last week and is already more than a quarter of its way to its goal. At £400,000, it's a small target for what's shaping up to be an ambitious space shooter, but Rockfish says the main reason it's going down the crowdfunding route again is to get the community involved.